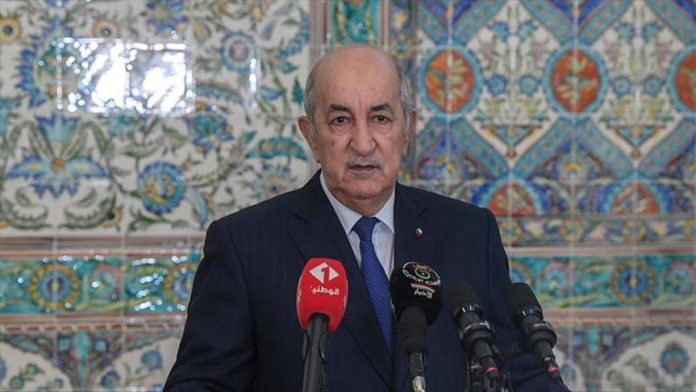 Algeria’s President Abdelmadjid Tebboune Thursday praised the Libyan government for stopping the fighting to find a political solution to the country’s conflict.

In a phone call to the UN-recognized GNA’s Prime Minister Fayez al-Sarraj, Tebboune stressed his country’s support for the Libyan government and people.

In a statement, the Libyan government said: “Tebboune praised the statements [by GNA and Libya’s House of Representatives] which stress a political solution to the Libyan crisis and the holding of parliamentary and presidential elections as soon as possible.”

For his part, according to the statement, Al-Sarraj expressed his appreciation for Algerian continuous support for the security and stability of Libya.

In another development, the Libyan government Thursday warned the Libyan warlord Khalifa Haftar against continuous attacks and crimes in the cities of Sirte and Taraghin.

In a statement, the Libyan government expressed its “concern about the reports received from Sirte confirming attacks on residents of the city, arrests, and killing of civilians.”

The government warned against the continuation of violations and crimes, saying it “will not stand by idly and will not neglect its duties towards protecting the Libyan people and seeking to move them peacefully to a more stable stage.”

The UN recognizes the government headed by Premier Fayez al-Sarraj as the country’s legitimate authority as Tripoli has battled Haftar’s militias since April 2019 in a conflict that has claimed thousands of lives.

8 killed in Venezuela mine explosion near Columbia border