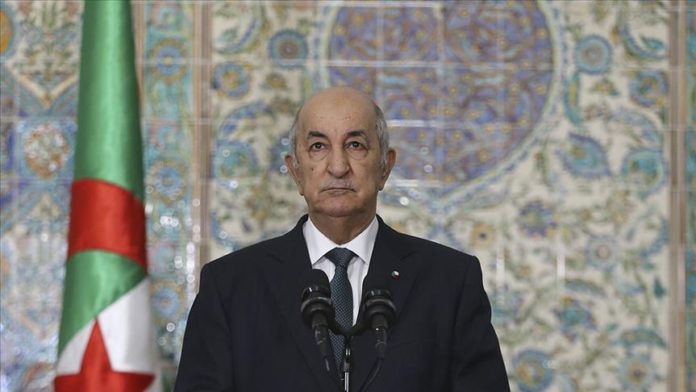 Algerian President Abdelmadjid Tebboune announced Sunday that he had recovered from COVID-19 and ordered preparation of a new election law to be ready within 15 days to pave the way for early parliamentary and local elections.

Tebboune, 75, made the announcement in a video posted on his Twitter account — the first post since he was transferred to Germany for treatment at the end of October, after he was infected with the novel coronavirus.

“Praise be to God for granting health after illness, May God heals the infected and place mercy upon the dead ones and comforts their families. Our return to homeland is near, so we may continue building the new Algeria,” he noted.

Tebboune said the timing of his return to Algeria has yet to be decided, and it might be in two or three weeks, “but I am following the situation in Algeria hour by hour,” he added.

The president added that he told his aides to prepare the new election law within 15 days “to begin the post-constitution phase”, as he previously pledged to hold early parliamentary and local elections immediately after the amendment of the constitution, which was ratified in a popular referendum in early November.

The terms of the parliament and local councils end in 2022, as they were elected in 2017 for a term of five years.

Referring to Morocco’s decision on Thursday to resume its relations with Israel, Tebboune said: “Algeria is strong and stronger than what some think … what is going on now is what we have been waiting for, but Algeria is not wavering.”

Algeria and its neighbor Morocco differ on many issues, the most prominent of which is the dispute on the Western Sahara region between Rabat and the Algeria-backed Polisario Front.

Tebboune assumed power on Dec. 19, 2019, after winning the presidential elections, after his predecessor Abdelaziz Bouteflika resigned on April 2 of the same year, under pressure from popular protests against his 20-year rule.

*Mohammed Ragawi contributed to this report from Istanbul