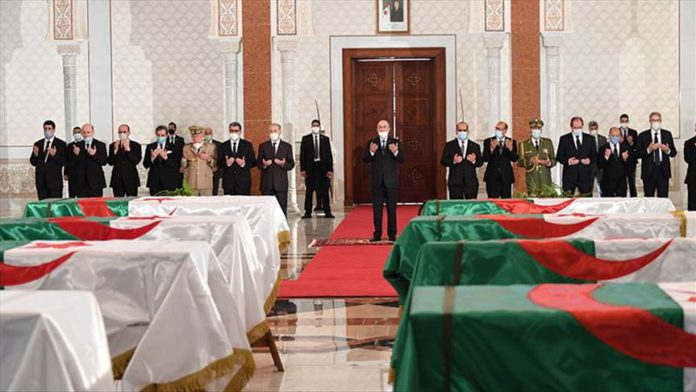 Algeria on Sunday held an official funeral for 24 independence fighters martyred during the Algerian popular resistance against French colonial rule.

President Abdelmadjid Tebboune and senior officials attended a procession to bury the remains at the El-Aliain cemetery in the capital Algiers.

Wrapped in the Algerian flag, the remains of the 24 fighters were moved on military vehicles decorated with flowers from the Moufdi Zakaria Culture Palace to the cemetery.

Algeria welcomed home the fighters’ remains on Friday after more than 170 years in France.

French colonial rule faced fierce resistance in Algeria, which was then met with a brutal crackdown by colonial forces.

Algeria has been demanding the return of the skulls since 2011 for their burial — a demand rejected by Paris.

Later, French President Emmanuel Macron announced that French officials were ready to enact a law that would allow them to hand over the remains, though the process was delayed for years.

Tebboune pledged after he came to power on Dec. 19 last year to restore the fighters’ remains and bury them in Algeria.

During the course of the struggle for independence, over 1.5 million Algerians were martyred, while hundreds of thousands more were injured, went missing or were forced from their homes.