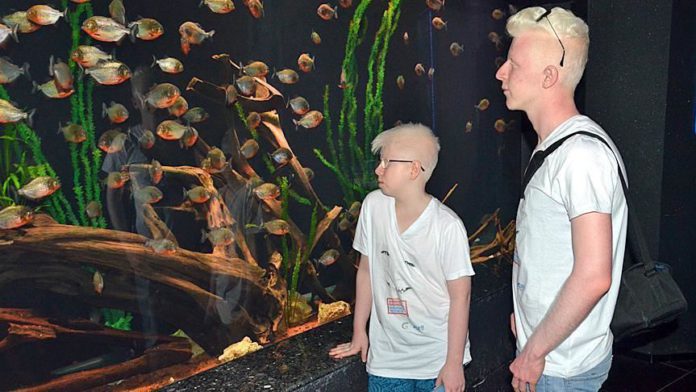 “Albinism is a condition that occurs as a result of genetic changes that partially or completely prevent the production of melanin pigment, which gives color to living creatures,” Serkan Ozorman told Anadolu Agency in an exclusive interview.

Also the father of a 7-year-old albino son, Ozorman, 38, first joined the Albinism Association, founded in 2013 in Istanbul. He later joined the group’s administration in December 2015, and has been serving as its head since May 2018.

“On average, one in every 70 people is a carrier of the gene. Albinism affects people of all races and all living creatures on earth,” he said.

“Albinism is a genetic condition. An albinism gene can survive up to seven generations,” he said, adding that the hair and eye color of parents of most albino children are normal, and there are no cases in their genetic background.

For a child to have albinism, said Ozorman, both parents must be carriers of the gene, but since it is a recessive gene, a child is not born with the condition if only one of the parents carries it.

Sight problems are common among albinos, he said, noting they “are not blind” but their vision is not normal and cannot be fully corrected with glasses.

“High degree of myopia, hyperopia, and astigmatism is common,” he said. “The biggest reason for eye problems in albinism is the underdevelopment of the fovea region.”

He explained that the fovea is a “small but very important” area of the eye. The retina contains nerve cells that sense images that come to the eye and turn it into a signal to the brain. The fovea is the region that provides sharp vision to the retina, and it is not fully developed in people with albinism.

“There is no exact reason why fovea does not develop in albinism, but it is linked to the absence of melanin pigment,” he said.

Ozorman highlighted that common conditions among albinos include nystagmus, a condition in which the eyes make repetitive and uncontrolled movements; strabismus, when the eyes do not properly align when looking at an object; and photophobia, or sensitivity to the light.

Since the iris is colorless and transparent, he said, it allows light to enter the eye directly, which causes light sensitivity.

“This sensitivity does not prevent people with albinism from going out in the sunlight. It is possible to protect the eyes from the sun with sunglasses or glasses that filter color. Sunglasses are mandatory, even for babies with albinism,” he said.

Speaking on the “reverse connection of eye nerves to brain,” Ozorman said eye nerves managed by melanin cannot properly connect to the brain due to melanin deficiency.

Nerve connections from the eye to the visual region of the brain are different, so the unusual nerve signals prevent the eye from functioning and perceiving in harmony.

He said contrary to popular belief, those with albinism do not have “red eyes.”

“Eye color varies from gray to blue and brown. Under normal lighting, the iris looks reddish or violet. The retina layer covering the inner part of the eye is visible from the outside since the iris is transparent,” he said, comparing this to the “red eyes” flash camera effect.

Ozorman stressed the sight rates of individuals with albinism vary from 5% to 20%.

Depending on the type of albinism, the color pigment may not be present in the skin.

“This means that the skin is completely or partially unprotected against the sun. The use of sunscreen is mandatory, otherwise sunburn may occur,” he said.

He explained that sunburn is skin damage caused by ultraviolet light from sun rays that cannot be seen by the human eye.

“Prolonged, unprotected sun exposure can lead to skin cancer at an early age in albino people. The only way to avoid it is to use a protective sunscreen with a dermatological feature regularly, even on cloudy days,” he added.

“Individuals with remarkable features such as white skin and white hair have difficulty being accepted in society and are exposed to strange stares. This inevitably complicates socialization,” he said.

Ozorman said that those problems could be eliminated by raising awareness in society and not considering albinism “differently.”

He said some albinos may encounter certain drawbacks caused by their low vision.

“For example, an albino person often wants to make sure of the direction of public transport because they can’t read the signs, but they may encounter harsh reactions because their situations are not known,” he said.

As an NGO, the Albinism Association aims to raise awareness of albinism in Turkey and improve the quality of life for albinos and their families, he said.

“Our first goal is to ensure that albino adults, youth, and their families have sufficient information about albinism, as well as to bring together albino individuals. And the second goal is to support all albino individuals living in our country. Improving their social rights is of great importance.”

With the aim of facilitating the full participation of albino children and young individuals in society, therapy and training seminars for families were offered by volunteer psychologists in northwestern Bursa province and in Istanbul, he added.

Ozorman said the group also promoted the #madetoshine and #IAAD hashtag campaigns and marks Albinism Awareness Day during the week of June 8-14.

“You can support us by joining our campaign!” he said, urging everyone to take a selfie by putting a hand over their eyes to protect it from the sun, and share the picture with hashtags on social media accounts.

He said the purpose of the campaign is to draw attention to albinos’ sensitivity to the sun.