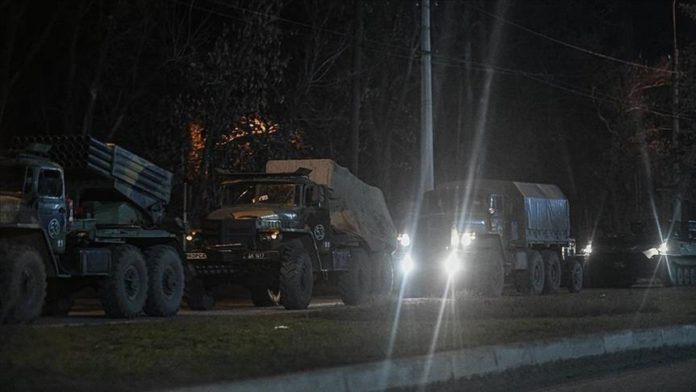 The strategic Gostomel airfield just outside Kyiv is under control of the Ukrainian army, the country’s armed forces said Friday, in the wake of attacks by Russian forces.

“Another tactical group of the defense forces is holding the GOSTOMEL airfield, to which Russian airborne troops rushed yesterday,” General Staff of the Armed Forces of Ukraine said on Facebook.

“Tonight, the defense forces continued to resist a significant offensive group of Russian occupiers,” it added, giving updates on the situation.

Russian troops carried out an airstrike on units in the city of Kropyvnytskyi, and were spotted above the cities of Vilkovo and Tiraspol, it added.

Ukrainian troops are fighting the Russian forces in the Dymer and Ivankov settlements and managed to contain Russian forces at the Teteriv River, the statement said. “The bridge across the river was destroyed.”

Meanwhile, the Ukrainian air force is protecting the skies, it added.

Defying threats of sanctions by the West, Moscow officially recognized Ukraine’s regions of Donetsk and Luhansk as independent states earlier this week, followed by the start of a military operation in Ukraine on Thursday.

They claimed that Russia was preparing to invade its western neighbor, allegations that were consistently rejected by Moscow.

Hungary blocks entry of nearly 600 irregular migrants over past 3...