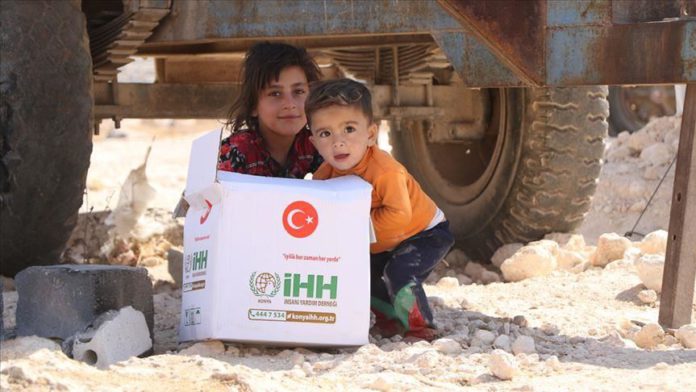 Turkish charity the Humanitarian Relief Foundation (IHH) on Tuesday sent aid supplies to rural Idlib, a northern province of Syria, where millions of people are living in desperate conditions due to internal conflict.

Some 2,419 boxes containing food supplies such as dry legumes, cereals, tomato paste and oil were distributed among families living in tent cities and camps.

In a statement, Selim Tosun, IHH’s media manager for Syria, said that with winter looming, the needs of families living in camps in Idlib, where some four million people reside, are growing.

“There are millions of people who have difficulties obtaining the minimum vital materials in the war-torn country,” Tosun said.

The displaced families are having a hard time, he said, adding that nearly 15,000 civilians have benefited from the help.

“We would like to complete all preparations before winter to provide people with help in emergency situations,” he said.

Syria has been torn by a civil war since 2011, when Assad regime cracked down on pro-democracy protesters with unexpected ferocity.