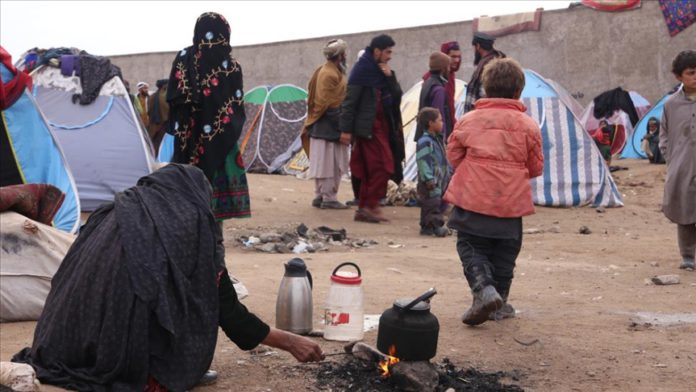 Internally displaced due to the Afghan conflict, hundreds of families in the western city of Herat are struggling to hold on to life as they are living in summer tents during the harsh winter.

Afghans, mostly from Tajik and Hazara ethnic backgrounds, have migrated from surrounding provinces such as Faryab, Badghis, Farah, and Ghor, and are waiting help from the Taliban administration and international institutions.

Migrants told Anadolu Agency that they face food shortages and are lack of electricity.

Abdurrahman Muhammedi, 38, a father of five who had to migrate from Badghis five months ago, said they moved due to the war. “Our situation was bad. There was a war in the province and districts around the clock,” he said.

“I didn’t eat anything today,” he continued. “I just drunk some tea and ate a piece of bread for dinner yesterday at around 5 o’clock.”

Those living in the camp cannot afford to buy wood or coal, and use plastics to make fire and cook some bread, which make their food unhealthier.

There is no source of water in the camp, so people carry it from fountains far away in drums.

Safura, a woman in her 70s, does not even have a tent to live in. She lives with her three grandchildren in a shelter as high as 50 centimeters (20 inches), which she built by lining up the stones.

“I live here. I sleep here. It is raining, and this place is filled with water,” said Safure, who lost her husband and children.

Nisar Ahmed, 32, a father of two, said that people died due to cold weather and hunger.

Twenty-day-old Yadigar is the youngest of the camp, who was born on the way to Herat and whose mother died shortly after giving birth to the baby.

Herat migration head Muhammed Refik Nirumend told Anadolu Agency that the number of people who migrated to Herat from the surrounding provinces is around 140,000.

He said they have distributed aid to 7,000 families so far and the World Food Program has made a commitment to help.

Nirumend also said their primary goal is to enable the return of migrants.