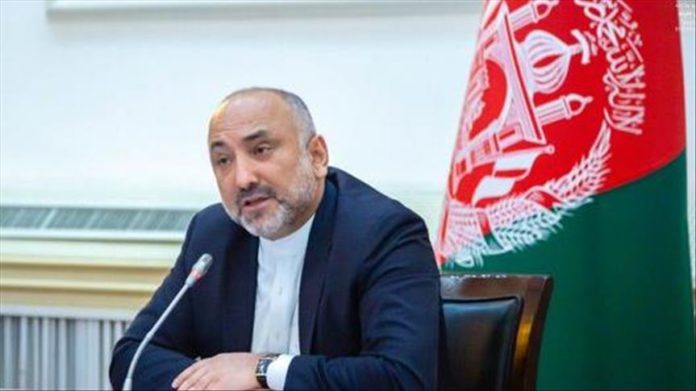 Afghanistan’s acting foreign minister on Thursday proposed a referendum or some other engagement to allow the public to voice their views about the future in this war-torn country, adding that all parties must commit to respecting its outcome.

Stressing that the Taliban should seek power through ballots not bullets and test their popularity using democratic means, Mohammad Haneef Atmar said adherence to human rights, democracy, and political inclusion must be declared essential elements for any path forward.

Addressing India’s strategic community from his office in Kabul via video link in an event organized by New Delhi-based Observer Research Foundation, Atmar said that an important element of the peace process related to the withdrawal of foreign-based troops must be made conditional to the withdrawal of irregular foreign fighters as well.

He said these foreign fighters are in league with the Taliban, which continues to launch attacks on the Afghan government.

Atmar, who held the position of interior minister in Hamid Karzai’s government, also sought to allay apprehensions that the fast-changing geopolitical scenario in the region has sidelined India. He asked New Delhi to continue its role in security cooperation and humanitarian aid.

“We’re asking them [Taliban] to agree on a people-centric political solution. If you’re representing the people’s will, then you shouldn’t be afraid of facing them and being part of a democratic system. Do not use guns, use your logic and appeal to convince people,” he said.

Atmar revealed that India, which recently became a non-permanent member of the UN Security Council, owed the position to Afghanistan, which withdrew its candidacy and allowed New Delhi to represent the Asia-Pacific group.

Declaring that India is an important player, he said his country would like to work with New Delhi bilaterally as well as in multilateral forums.

Outcome of talks to be submitted to UN Security Council

Reflecting that the people of Afghanistan are sick of witnessing their country being a battleground for various powers, he asked countries to help make the war-torn country a center of cooperation.

Atmar said that the outcome of the intra-Afghan dialogue process will be submitted to the UN Security Council so that powerful world bodies and international stakeholders guarantee its implementation.

“We will never allow our territory to be used by any state or non-state to hurt any other country, including Pakistan,” he said, expecting that other countries will also reciprocate the gesture. He said terror groups also pose a threat to Pakistan and the fallout from terrorism has affected all countries in the region.

Political agreements rest on the presumption of acceptance of election results, setting up a high council for national reconciliation, and the release of prisoners, he said.

“In reciprocity, we hoped the Taliban would keep its commitment by reducing violence. But it has not been done. Every week 100 people on average are killed across the length and breadth of Afghanistan,” he said.

On the commitment to free prisoners, Atmar said that out of some 5,000 Taliban prisoners identified for release, 4,440 are now out of detention. ”The remaining 550 are facing severe cases from drug trafficking to serious terror acts. Some international partners have also opposed their release,” he said.

Atmar said that ironically while the Taliban have reduced violence levels against foreign troops, they have escalated attacks against the Afghan people, calling this unacceptable.

Prospect of peace around Eid holiday

But he said he hoped the coming Muslim Eid al-Adha celebrations set to begin on July 31 may see some progress. He said areas like Farah, Nimruz, and Samangan, which recently witnessed major violent incidents, have no foreign troops.

“There is no justification for the current level of violence, and it has to be stopped,” he said, adding that every state that is part of the peace process must reflect on the commitments.

He said that as many as 40 partners across the world working to build a consensus on peace had concluded that the cost of the war was too high, and engagement with the Taliban is imperative to counter-terrorism both at the regional and international level.

But he said the Taliban’s symbiotic relationship with trans-national terror groups is complicating the issue.

“There is no reason to make peace with non-Afghan terror groups, who are the source of threats to the region. We will not allow the squandering of all the gains that have been accrued over the past 19 years,” he said.

Atmar, who was removed as an interior minister in the wake of June 2010 attacks on the Afghan Peace Jirga, has also worked with several international humanitarian groups and served as an education minister as well.

Change in Taliban leadership and Chabahar

On a pointed question on recent changes in Taliban leadership, he said while it represents an internal power struggle, there is a desire for peace in certain elements of the resistance group, saying he hopes they will prevail to take the peace process to a logical conclusion.

He further said that the whole assumption of the peace process is to dismantle the terror industry, which starts from education, indoctrination, sanctuaries, the supplying of weapons, and outside support. He said the US must constantly verify on the ground whether the Taliban has been abiding by its commitments.

Admitting that US sanctions and security are playing a spoilsport in the operationalization of Iran’s Chabahar port, Atmar said a recent agreement between China and Iran will further integrate the region and should not be seen as a threat. In a recent communique to New Delhi, Iran expressed disappointment over the Indian government delaying funding of railway project supposed to link to the port.

Without naming the US, the Iranian communication said, “No third party’s measures or restrictive policies such as unjust unilateral sanctions, should be allowed to hamper the historically cordial relations between India and Iran.”

On a question on the Afghan army lacking the capacity to tackle the Taliban on its own, the acting foreign minister said that in case of success in the peace process, Kabul would be less dependent on foreign aid and spending resources on the military. But he reminded international donors that if the process fails, which will mean the continuation of support to terrorism, Afghanistan would require continued military help.