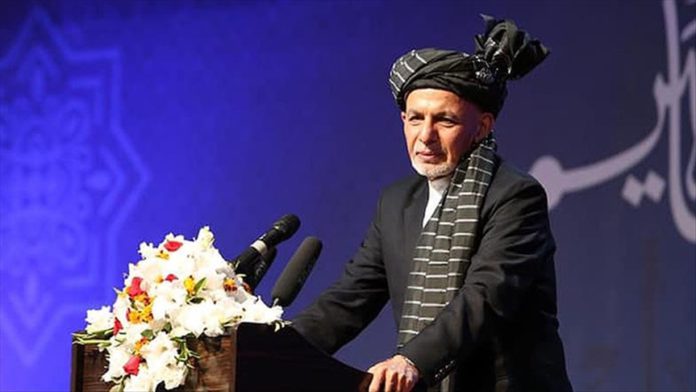 Afghanistan’s president on Saturday categorically rejected rumors of plans to set up an extraconstitutional interim or transitional government in the country.

“We are ready to talk about free and transparent countrywide elections under the supervision of the international community. We can discuss and agree on a date,” he said, describing the rejuvenated Afghan peace process as an “unprecedented” achievement.

“Afghans are tired of war, but they do not want the peace of the graveyard,” he added, urging the Taliban to end forego violence and make sincere efforts for a political agreement.

Ghani also called on Pakistan, a country believed to wield significant clout over the Taliban, to embrace this opportunity and strive for genuine peace in Afghanistan.

“This is an important opportunity for Pakistan to quit the politics of past decades and acknowledge an independent, free, and proud Afghanistan,” he said.

Ghani’s remarks came amid growing buzz about a participatory or transitional government, which would include the Taliban, as a way forward for the Afghan peace process.

During US envoy Zalmay Khalilzad’s recent trip to Kabul — his first since President Joe Biden assumed office — there were discussions on the possibility of the UN organizing a high-level meeting of countries with influence over the Taliban, including Iran and Pakistan, according to the local Pajhwok news agency.

The aim of this meeting would be to develop consensus among all parties on Afghanistan’s long-term political future, the agency reported.

“Both sides [US and Taliban] expressed their commitment to the Doha agreement and discussed its full implementation. Likewise, the current situation of Afghanistan and the rapidity and effectiveness of the Intra-Afghan negotiations were discussed,” Mohammad Naeem, a Taliban spokesperson, said on Twitter on Saturday.