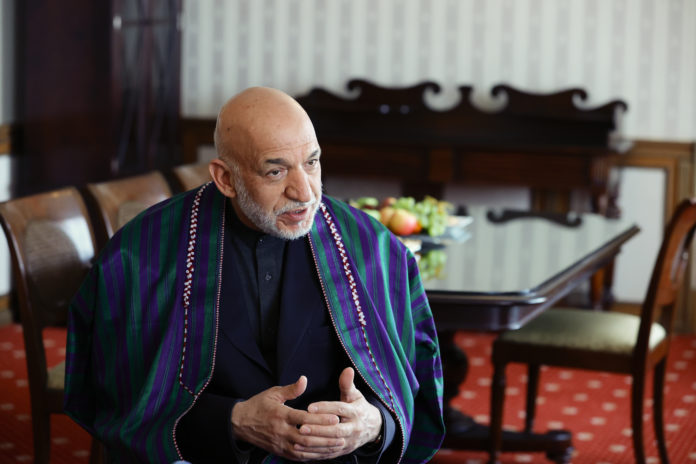 Recent developments in the Afghan peace process, provoked by a possible refusal of the new US administration to withdraw its troops in violation of the 2020 agreement with the Taliban, pushed countries to try and avert a resulting escalation in hostilities.

Last week Moscow summoned a meeting on Afghanistan so the parties could “get prepared” for an upcoming Istanbul meeting, where they will hold full-fledged direct peace talks under UN auspices.

In an interview with Anadolu Agency, former Afghan President Hamid Karzai, now a top Afghan peace negotiator, shared his vision of the current situation in the peace process and his role in it.

Karzai praised the meeting in Moscow, saying it was well-prepared and let the sides have open talks on the most acute problems.

“Russia had excellent preparations for the meeting and the joint statement that came out was very significant. Every side expressed its feelings. The four countries [Russia, China, the US, and Pakistan], Turkey’s representatives, Qatar also spoke, so did the Afghan sides. This was the first time that a large gathering of the Afghans worked together. The event overall was very productive and positive,” Karzai said.

The Moscow meeting showed that the major world powers got together on Afghanistan, so there was an environment of cooperation, and that is what Afghanistan needs, Karzai said.

“The Afghans spoke freely, without any hesitation, expressed their grievances, demands, proposals. Overall, the meeting was excellent,” he said.

But the issue of the US troops’ withdrawal was not on the agenda of the meeting; the focus was on encouraging two things — major powers’ cooperation on Afghanistan and Afghans’ use of this opportunity to settle themselves — Karzai said.

‘Turkey, an old friend of Afghanistan’

The next step in achieving a peace settlement for Afghanistan is the meeting in Istanbul, Karzai said, noting: “Turkey, like Russia, is an old friend of Afghanistan, and we are definitely going there. But the nature of the meeting will be different.”

In Moscow, the Afghan sides were guests and observers of the troika plus — Russia, China, the US, and Pakistan — meeting, while the Istanbul meeting is convened for direct negotiations of the Afghan sides, he added.

“Istanbul meeting is an intra-Afghan dialogue, just like we had in February 2019 in Moscow. It will be the nature of the conference in Istanbul. We must go there with prior preparations, understandings, and agreements on issues,” he said.

The former Afghan president stressed that in a situation where the Taliban is reluctant about the idea of an interim coalition government, peace must be a priority for all sides.

“If the Taliban can agree to join the current government, that would be the easiest, to join the current government and all of us work together for the needs of the country and amend the constitution if need be. If that doesn’t happen, then make peace the priority and do what is necessary, I mean, for Afghans to have peace and tranquility and stability,” Karzai said.

‘I don’t seek a role for myself, I work for peace in Afghanistan’

Asked about what role he would like to assume himself in a future peaceful Afghanistan, Karzai said he had enough time in office and that he works for peace, not for getting a position in the government.

As for the Taliban members, they are Afghans, and as Afghans, they have every right to take part in the country’s political life, vote, and get elected, including for the highest political position through getting the support of the Afghan people, he also said.

‘We will not compromise on freedoms, values, rights, place of women in Afghan society’

The Afghan people want peace, but they also want Afghanistan to progress, so the Taliban and all other political forces have to keep it in mind and [they have] to be committed to freedoms and rights, which are an integral part of that progress, Karzai said.

“We want peace, we must have peace. But the will of the Afghan people is also that Afghanistan must progress, must move forward, that the Afghan women get the best of education, that Afghan women have the best place in the society, they can achieve anything they want.

“Afghanistan must move on it, our girls must get the best education together with our boys, and the Afghan women must have the best place in our society and rights, and contribute to the well-being of Afghanistan.
“That is the condition. We will not compromise on that. We will not compromise on freedoms, on values, on rights, and the place of women in the Afghan society,” he noted.

According to Karzai, the position of women, as well as other freedoms and rights, are regularly discussed with the Taliban, and “there are a lot of changes in their views on this.”

“But we will continue to have more discussions, and definitely, this is a right, a necessity of Afghanistan on which we cannot compromise. We want the Afghan people, men and women, to be the best-educated so that we can build our country and stand on our own feet. That can only be through education, that can only be when the Afghan women participate equally shoulder to shoulder with Afghan men in making Afghanistan a better country,” he said.

“There has to be an Afghan element that serves as the foundation of the agreement and peace process and peace itself. Eventually, it has to be the Afghans who decide, make peace and put the country to progress, dignity, and good life.