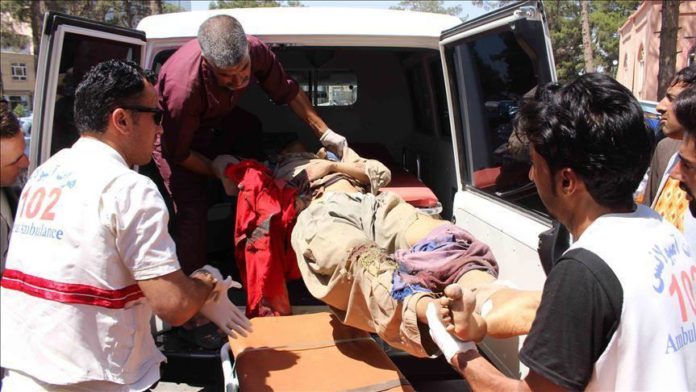 The first half of this year saw 2,957 civilian casualties in Afghanistan as the war enters its 19th year, the country’s rights commission said Tuesday.

More than 1,200 civilians were killed and over 1,700 injured in 880 incidents of violence, according to latest figures by the Afghanistan Independent Human Rights Commission.

Addressing a news conference, Naeem Nazari, deputy head of the commission, said this figure indicates an 11% decrease in civilian casualties in comparison to the year 2019.

However, it indicates, an average of 16 people were killed or injured every day during this period.

He added the figures indicate the Taliban are responsible for some 48.5% of the civilian casualties, Afghan government forces 15.5%, and foreign troops 2.3%.

Also on Tuesday, at least five people were killed in a landmine blast on the outskirts of Afghan capital Kabul as the US condemned the Taliban for a suicide car bombing a day earlier killing at least 10 security forces and injuring over 50 others, mostly civilians.

In a series of tweets, Zalmay Khalilzad, US special representative for Afghanistan reconciliation, said on Tuesday the US and Taliban have reached Day 135, a ‘key milestone’ in implementation of the U.S.-Taliban Agreement. “The use of major explosives to detonate a vehicle in a provincial capital is unacceptable and will strengthen those who oppose peace and play into the hands of spoilers. All sides must reduce violence,” he said, condemning the attack.

Khalilzad said the Taliban’s attack in the provincial capital Aybak of Samangan contradicts their commitment to reduce violence until a permanent cease-fire is reached in intra-Afghan talks.

On their part, the Taliban welcomed the reduction of US forces on Afghan soil to the agreed on level of 8,600 and vacating five bases in accordance with the agreement.

In a seven-point statement, the group’s spokesman, Zabihullah Mujahid, blamed the US and Afghan forces of continuing with the air raids against Taliban and civilians.

Defending the suicide truck bombing in Samangan, he said: “Yesterday’s attack in Samangan and similar escalation of violence in other areas are a reaction to the launch of operations by the ‘Kabul administration’ (Afghan government), ruthless attacks on civilians like in Sangin district of Helmand and the violations committed by the American forces. These cannot be classified as actions but as reactions”.

Russians sign up for jab with start of mass vaccination