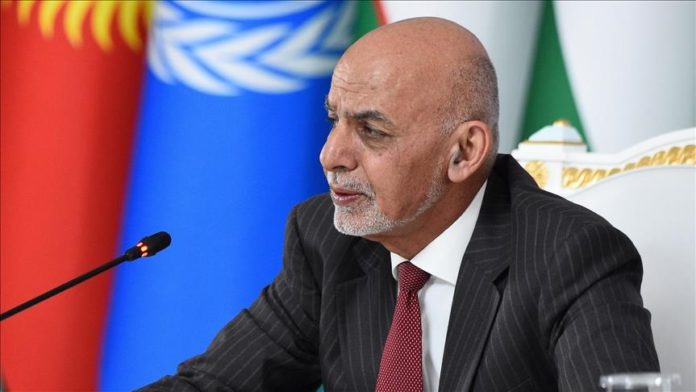 Defiant Afghan President Mohammed Ashraf Ghani said Tuesday that a strategy to bring security to the war-ravaged country was tabled as the Taliban seems unwilling to make peace.

Flanked by an array of politicians and top government officials, Ghani made the remarks as he delivered a traditional Eid al-Adha address after offering prayers at the presidential palace in the capital Kabul.

Eid al-Adha celebrates Prophet Ibrahim’s, or Abraham’s, willingness to sacrifice his son by God’s command but was told to replace him at the last minute with a ram.

Calling for comprehensive nationwide support for the current democratic system of government, Ghani said all Afghans must unite behind security forces for at least six months to make the Taliban realize what they want.

“The Taliban are not abiding by their promises, they have not shown up for meaningful talks, but speaking via the ‘sword’s and the language of crude force,” said Ghani while expressing regret for the release of 5,000 insurgents who were freed in line with a US-Taliban deal in February 2020.

There was no immediate response from the Taliban to the Afghan president’s remarks.

The latest round of rejuvenated intra-Afgan talks failed last week to deliver a breakthrough with the government and the Taliban vowing Sunday to continue and expedite high-level talks in Doha, Qatar.

“They (both sides) realize the need for an agreement that can address the interests and demands of all women and men of Afghanistan in light of the Islamic principles. They (both sides) are determined to stay engaged in negotiations at a high level to reach such an agreement, and for reaching this aim continue such meetings,” it said.

Taliban spokesman Mohammed Naeem categorically rejected any agreement on a cease-fire or the release of prisoners, minutes after the statement was released.

Sources on the government’s peace delegation told Anadolu Agency that the Taliban floated the idea of an extended cease-fire provided that up to 7,000 more captives are freed.

The government, on the other hand, has been hesitant to accept the idea as a way out because many of the 5,000 Taliban who have been freed have returned to the battlefield.

Since US President Joe Biden’s announcement of an exit plan in May, the Taliban claimed to have captured more than 150 more districts in Afghanistan while Afghan forces claimed to have killed close to 200 insurgents in daily counter-terrorism operations.

No possibility of talks with India, says Pakistan