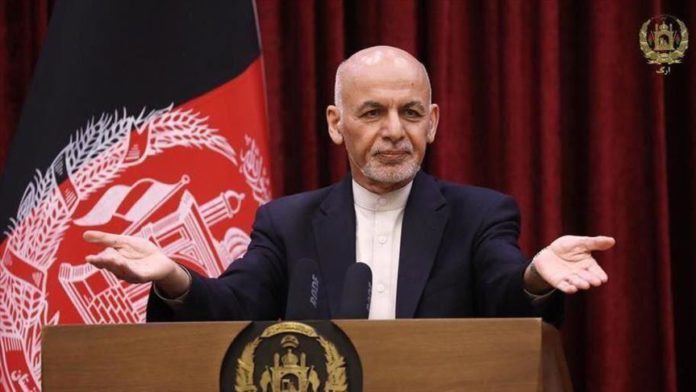 The president of Afghanistan has said that as violence-reduction efforts continued “on course,” US-led peace talks with the Taliban would progress to a new phase to be announced next week.

Ashraf Ghani stressed that a three-day cease-fire between the Afghan government and the Taliban during the Muslim Eid al-Fitr holiday helped create an environment in which peace negotiations could take place, adding that the path to a lasting peace would be long and difficult.

Ghani, who has led Afghanistan since 2014, spoke via Zoom from the capital Kabul in an Atlantic Council FrontPage event on Thursday that was co-sponsored by the US Institute for Peace (USIP).

“The Eid cease-fire was a major movement to enable us to take some bold and critical decisions,” Ghani said, referring to the release of up to 3,000 Taliban prisoners as part of a prisoner exchange deal.

The remaining commitment, he said, will be “to release an additional 2,000 prisoners within a very short period.”

Since a landmark peace deal between the US and Taliban last February — only cautiously welcomed by the largely excluded Afghan government — the implementation of the accord has faced many bumps, bringing more bloodshed and finger-pointing and deepening distrust.

The release of some 5,000 Taliban prisoners in exchange for 1,000 captive Afghan security personnel, along with a reduction in violence, was one of the main conditions for the intra-Afghan peace talks that were originally scheduled for March.

Now, after months of delay, Abdullah Abdullah, the man tasked with leading Kabul’s negotiating team, has hinted that the discussions may finally begin by mid-June.

During his appearance at the Atlantic Council event, Ghani underlined the importance of “maximum reduction” in violence for garnering further public support for the peace process and warned against spoilers.

“I’ve spoken to Ambassador [Zalmay] Khalilzad yesterday, and also, to the special representative of Qatar this morning. I think now we are on course. And next week, we should be able to inform the world of the next step,” he said.

Neighboring Pakistan, another key player in the Afghan peace push, also seems to be preparing for the coming of intra-Afghan negotiations.

Islamabad has appointed senior diplomat Mohammad Sadiq Khan, who served as ambassador to Afghanistan from 2008 to 2014, as special envoy to facilitate the peace process — a move hailed by Kabul.

US yet to withdraw from Afghanistan

As for reports that US President Donald Trump wants to see all American troops out of Afghanistan by presidential elections on Nov. 3, Ghani allowed that this would be a “sovereign decision of the United States.”

However, he went on to say that “yesterday, General [Kenneth F.] McKenzie, commander of CENTCOM, said the conditions were not ripe. The key framework is a conditions-based approach. Our imperative now is to conclude peace as soon as feasible, but a sustainable peace.”

Ghani emphasized that the US and Afghan governments should continue to have a strategic dialogue on the nature of threats. “That threat of terrorism from al-Qaeda, from Daesh [ISIS] and from other groups is not going to end with peace with Taliban,” Ghani warned.

During the program, Ghani dismissed a possible Taliban request for an interim government excluding Ghani as “premature.”

Ghani also reassured that a power-sharing deal signed last May with his rival Abdullah Abdullah to end months of political uncertainty was going well.

He underlined the urgency of a humanitarian cease-fire for the Afghan government to provide services to “90% of the Afghan population” who needed food assistance and medical attention amid the novel coronavirus pandemic and resulting economic devastation.

Afghanistan has so far registered nearly 23,000 coronavirus cases and over 420 deaths.

Ghani stressed the importance of Afghanistan’s regional connectivity with all its neighbors, especially in trade and investment.

“Afghanistan is described as the Saudi Arabia of lithium. We can be among the 10 largest players at least on 10 basic minerals,” he said, drawing attention to his country’s significance for international investors and global development banks.

“Belt and Road is not a grant initiative. It’s loans. Afghanistan cannot take loans. We can only take grants. But a consortium that would enable us to bring all of these actors together for railways is extremely important,” he said, thanking Turkmenistan and Azerbaijan in particular for their investments in Afghanistan.

The Belt and Road Initiative is an ambitious development program to connect Asia with Africa and Europe via land and maritime networks along six corridors with the aim of improving regional integration, increasing trade and stimulating economic growth.