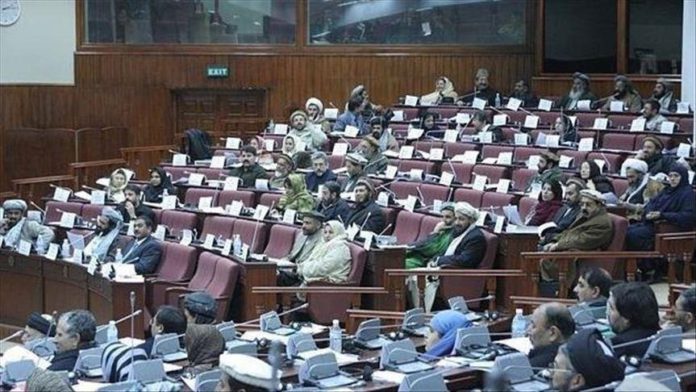 Members of the parliament in Afghanistan on Monday expressed serious concerns over the fall of districts to the Taliban amid rampant violence nationwide.

Taking part in the preliminary debate, members of the Wolesi Jirga (lower house) demanded the government ensure peace and security of the population and probe factors behind the alleged surrender of several check posts and security positions to the Taliban without any resistance.

On the war front, the Afghan Defense Ministry said on Monday it killed 271 Taliban insurgents and wounded another 162 in the past 24 hours in different provinces during the ongoing counter-terrorism operations.

The Taliban, on the other hand, claimed to capture yet another district, Kohmard, in central Bamyan province.

In a statement, the group also rejected reports about Taliban fighters forcefully marrying young girls, widows and enforcing strict rules in areas falling to them.

Fake statements, documents, threats, and other letters are recently being circulated on social media and even physically airdropped into some areas, the statement said.

Similarly, fake videos showing activities of ISIS/Daesh militias are also passed off as recent actions committed by the Mujahideen of Islamic Emirate, said the group.

Meanwhile, at least three civilians lost their lives and six others were injured in a landmine blast in the country’s restive southern Helmand province on Monday.

As per the provincial administration, the incident took place in the provincial capital Lashkargah when a car carrying a family, including women and children, hit a landmine.

According to the International Committee of Red Cross, as many as 750,000 people are threatened by the presence of mines and unexploded remnants of war, and over 29,500 of those who have lost a limb due to landmines or other war remnants are undergoing treatment in the country.

UK calls on China to give UN access to Xinjiang