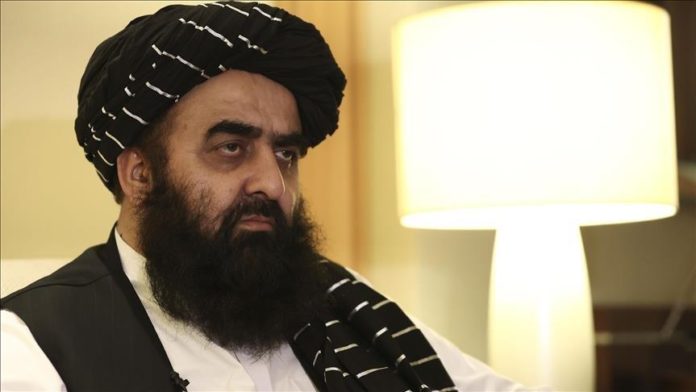 He made the remarks at the interim government’s first Economic Conference in Kabul which was chaired by acting Prime Minister Mullah Hasan Akhund.

Muttaqi urged Afghans to “stand on their own feet,” according to a statement issued by his office.

He also called on the US to “unfreeze the assets of Afghanistan and remove all impediments for relief organizations.”

Affirming the challenges the nascent government is facing after two decades of war, he said: “Economy has a distinct and key role in our new foreign policy. We believe in a neutral, balanced and economic-centric foreign policy.”

Such a foreign policy has “the potential of isolating conflict and bringing governments closer on the basis of mutual interests,” he said, referring to a regional push toward geo-economics.

This approach will “transform Afghanistan into a hub of regional economic connectivity,” he added.

Inviting foreign investors to Afghanistan, Muttaqi said: “With security taking hold in Afghanistan and with the advent of a responsible and corruption-free government, an opportunity has presented itself for us to play a pivotal role in regional economic connectivity.”

With the efforts of the Taliban-led government, he said Uzbekistan and Tajikistan have been connected with South Asia through Afghanistan.

“Another trilateral Turkmenistan-Afghanistan-Pakistan transit agreement is also under works and all shall witness its materialization very soon,” he said.

Negotiations are also underway to connect Russia, Kazakhstan and ultimately the entire Central Asia with South Asia, he added.

Muttaqi said that after taking on the role of foreign minister in the Taliban-led government, he held meetings with international leaders to rebuild the image of the country “following a two-decade propaganda war against us.”

Muttaqi said his ministry was developing a policy to “delink economic and humanitarian assistance from politics.”

He said the two-decade regime, backed by the US, resulted in “endemic corruption, neglect of basic infrastructure and imposed wars” due to which our people are facing a humanitarian catastrophe.

“I call on the United States of America to unfreeze the assets of Afghanistan’s Central Bank and to remove all impediments for relief organizations and Afghans in money transfers to Afghanistan,” he said.