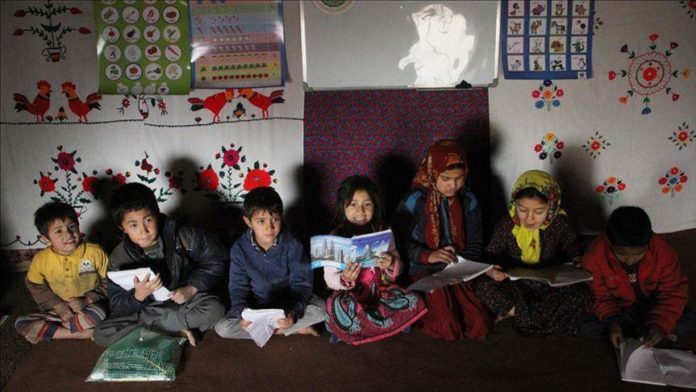 The streets of the Afghan capital Kabul are once again abuzz with excited children as the new school year begins with the scent of spring in the air.

After extending its winter holidays that were tainted by the coronavirus pandemic, Afghanistan began the new school year on Tuesday.

The Afghan government aims to enroll a million more children in schools this year as the war-ravaged country tip-toes towards its development goals amid the relative peace of the past couple of decades.

“All of my friends are here […] I’m happy to be admitted to school,” said the seven-year-old, chuckling.

At his public school, two of his elder siblings and several neighborhood boys and girls are already enrolled. Atta Ullah’s father, Mir Aagha, was also relieved that classes are resuming, lamenting the time lost during the extended closure that saw children fooling around in the neighborhood, playing cricket, marbles, or flying kites.

“He [Atta Ullah] is the light of my eyes. I can’t afford to enroll him, in fact, any of my children in private schools for good quality, English-language education. Still, it’s good he’s enrolled in the government school at least. I don’t want him to remain uneducated like myself,” said Aagha, who sells french-fries in front of the school where his three children — two boys and a girl — study.

At the inauguration of the new academic year, President Mohammad Ashraf Ghani vowed, among other incentives, to raise teachers’ salaries, hire over 11,000 additional teachers, and build 1,800 new schools.

Ghani also pledged to modernize the curriculum in line with advancements in science and technology. “Alongside strengthening [education] of national languages [Pashto and Dari], attention will be paid as a necessity to understanding international languages,” said the former World Bank economist.

Over the past couple of years, most urban centers in the country, particularly Kabul, have witnessed a surge in private schools, tuition centers, and particularly English-language teaching institutions, indicating a renewed passion for education among Afghans amid years of raging conflict.

According to the country’s Education Ministry, approximately nine million children of various ages are enrolled in schools. While UNICEF data suggests that an estimated 7.3 million Afghan children, including 2.4 million girls, attend school, about 2.2 million girls are not enrolled.

Earlier this month, a controversial memo issued by the Education Ministry banning schoolgirls over the age of 12 from reciting poems or singing in public events caused an uproar in the country.

Maryam Sama, a prominent women and children rights activist and member of the lower house of parliament (Wolesi Jirga) told Anadolu Agency that this gender-based ban is unacceptable.

“This was an illegal decision, contrary to values and treaties that we adhere to in our discussion about human rights. This extreme and ridiculous behavior has no place in modern Afghanistan, where the people’s voice is loud and not silent. Our struggle for gender equality is at the beginning, we have a long way to go before we reach the desired situation. But we’ll never back down,” she said.

The ministry initially said parents had asked for their daughters to be excluded from performing in public, while some students had complained that taking part in school events hindered their studies. However, it later backtracked and issued a clarification.

Ruhullah Sarwan, a Kabul University professor, told Anadolu Agency that mindsets had changed over the past two decades in Afghanistan, with the passage of time and advent of telecommunications in the country, where education is receiving particular attention.

“The transformation in the past nearly 19 years has brought many fundamental changes. Unlike the past, when people would simply dream about sending their children to serve in the army or go to the Gulf States for intensive labor work, now they want their children to get educated, find good jobs at home and abroad.”