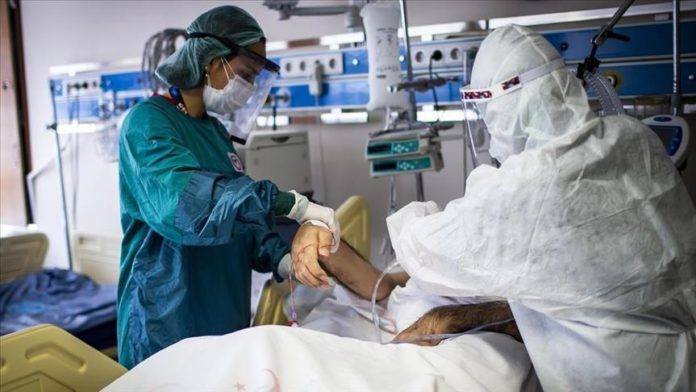 Ana Maria Giraldo stood six feet away from her older sister, nieces, and nephew at a cemetery in the Colombian capital Bogota.

A priest wearing a medical gown and a face shield over a face mask read a few prayers, his words muffling behind his mask, while a violinist in protective gear played nostalgic funeral hymns.

The priest wrapped up the ceremony in 10 minutes, and Giraldo waved goodbye to her sister. The family members could not kiss or hug or cry, or speak about what life would be like without Luis Enrique Giraldo, their father, who had died of coronavirus two days before.

Giraldo approached the funeral car, where he was lying in the casket. She looked inside the vehicle and told him how much she admired him for raising a strong family.

“I love you, dad. Thank you for everything you did for us. Rest assured that we’re going to be ok,” she said through the car window.

Then everyone went home.

The pandemic has changed the funeral traditions and rites in the world. In Colombia, generations-old mourning rituals have been replaced by short, frivolous, and virtual ceremonies. Body embalming, receptions, pallbearers, big choirs, and crowds are all gone. Coffins, funeral cars and black mourning clothes remain.

Normally, some relatives would have flown in from other cities for the funeral. Neighbors would have come, along with school and college friends, with big flower arrangements and fruit baskets to comfort the family during their time of sorrow.

Instead, on Oct. 7, only Giraldo and her sister Maria Victoria arrived with their children to a cemetery they were assigned to. Their brother, Ignacio, who lives in the US, attended the funeral online. Skipping the church service was hard enough for him, but not being at the graveside a lot to bear.

Giraldo, 40, had her father Luis Enrique Giraldo living in her house for a few days before his death. A week earlier, the whole family had decided to rent a house two hours away from the city to spend time together following months of strict quarantine.

But someone in the family had tested positive for COVID-19, so Giraldo brought her dad to her house in Bogota, where she kept him isolated and well cared for.

“Everyone in my house took the test and it came back negative, so we were not worried,” she said.

But one night she found him on the floor at 4 a.m., having fallen out of bed. He told her he felt dizzy and fatigued, so she took him to the hospital. Giraldo was relieved when a nurse said he might have vertigo and that it should not be a cause for alarm.

Yet, shortly after that, her father started to show coronavirus symptoms which started with a cough, difficulty in breathing, and a drop in his oxygen-saturation level. He was immediately transferred to a COVID-19 unit.

Knowing they would not see her dad for a few days, Giraldo decided to hold a video call between her father and the immediate family members. Some nine people from Colombia and the US gathered together in the video conference. There was an outpouring of digital love towards the father. Luis Enrique was lively, making jokes, and they remembered old times as they laughed altogether.

That was the last time Giraldo saw him. He stayed for a week in a hospital room, but soon the coronavirus symptoms got worse and he was taken to an intensive care unit.

Medical workers called Giraldo every day at 5 p.m. to inform her of the latest news about her dad’s health.

“Every day for a week, they told me ‘he is stable’,” Giraldo said.

But on Monday, Oct. 5, a call came at 3 p.m. It was a doctor who broke down when delivering the news that her father had passed.

“I did everything I could,” said the doctor. Giraldo cringed. “I know you did,” she heard herself saying.

He was resuscitated for 20 minutes, but his heart finally gave out.

Luis Enrique, 83, was an introverted and shy man, but loving and affectionate with the family. It was a tight-knit family. Giraldo and her siblings would call him many times a day to check in. He enjoyed good health, walking in the park and cooking with his grandchildren.

He was still grieving the loss of his “queen”, as he used to call his wife — to whom he had been married for over 50 years and who had passed away a year and a half ago after suffering a heart attack.

When his wife died, there was a two-day wake attended by family members and they were able to see her before the cremation.

“I remember that my mom looked beautiful. We chose a very nice and elegant outfit for her and she even had lipstick on. She looked amazing,” Giraldo said.

“My dad probably didn’t have anything done, and I assume he was cremated just as he died.”

On this occasion, the family planned the cremation from a distance. They sent paperwork electronically, they were sent photos of caskets and urns. A funeral worker explained that the cemetery allows a brief ceremony only with a few loved ones at the entrance of the burial ground. Nobody witnessed the body being picked up in the hospital or placed in the coffin and later in the cremation furnaces. Giraldo said they just hoped the hospital and funeral staff had maintained dignity for their father’s body.

“New restrictions meant we could not be involved in the process,” Giraldo added. “And that was sad.”

Yet, for her, she said, the worst part of it all was thinking about Luis Enrique’s final moments.

“Not being able to be there when he died felt wrong, even in the middle of a global pandemic,” she said.

Giraldo wanted to know if he had suffered during the last minutes of his life, so a few days later she decided to call the hospital’s social worker who guides families through the process of losing a loved one.

“Don’t worry, he was sedated the whole time,” the social worker told her. “He died in his sleep.”

Now all that remained was to mourn and carry the weight of the grief alone, unable to share that with her loved ones in-person.

“The pandemic deprived us from those moments that you give yourself to say goodbye to someone that you love very much and that you will never, never see again.”