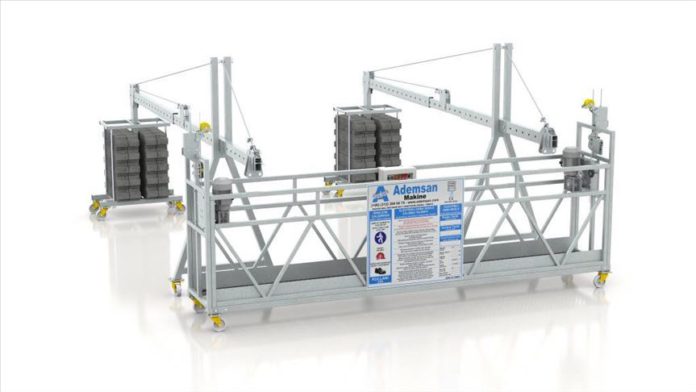 According to a statement by the company, it has carried out hundreds of projects both abroad and at home, with the principle of providing “reliable solutions at height.”

It has installed three Ast-30 and an Ast-60 monorail facade cleaning systems at the operation building of Turkey’s flag carrier, Turkish Airlines, at Istanbul Airport.

Ademsan Machinery delivered in June the project-specific Ast-30 Monorail to NG Hotels in the lakeside district of Sapanca in northwestern Turkey.

These tailor-made systems can move horizontally and vertically on a monorail mounted on a building, greatly easing facade cleaning.

The company also contributed to the Kastamall project, the largest shopping mall, hotel and residence in the Kastamonu province on Turkey’s Black Sea coast, with the Ast-50 Facade Cleaning System.

“For many years, facade cleaning systems were supplied from abroad. This created both great cost and maintenance difficulty,” said Ramazan Albayrak, the general manager of Ademsan Machinery, in the statement.

“Thanks to domestic production, solutions for large projects can now be offered very quickly.”

Albayrak said his firm was proud to realize hundreds of projects since its foundation in 2004.

“We continue on our way with these beautiful projects delivered in June,” he added.

Nearly 450,000 coronavirus vaccine doses administrated in Turkey in one day

US building collapse death toll rises to 4; missing at 159