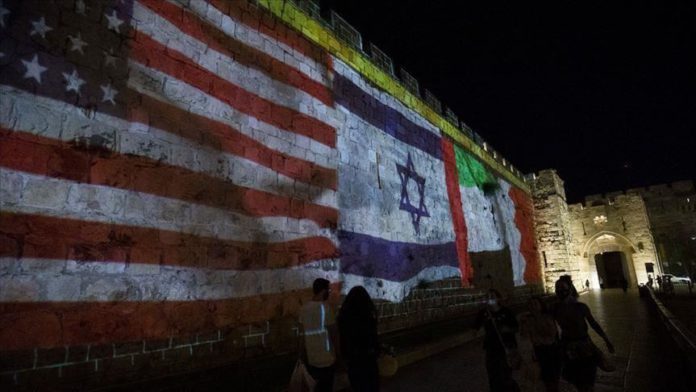 Douglas London said in an opinion piece penned for the Atlantic Council that he reacted to the normalization moves with “trepidation more than celebration.”

London said that it reminded him of the US-backed agreement signed by Lebanon and Israel in 1983, which shattered following the Lebanese government’s 1984 collapse, leading “unprecedented acts of terrorism against US Marines, French paratroopers, and Palestinian civilians.”

“In 1983, the US chose to cut out Syria, which, like Israel, occupied parts of Lebanon, and the local Shia, Sunni, and Druze communities. The Trump administration has also excluded key players in brokering the Abraham Accords,” he said.

“Once again, the US is placing all its eggs in the baskets of autocratic leadership while neglecting the Palestinians and the continued resonance of their cause in the broader Arab and Muslim world.”

Noting that US President Donald Trump’s administration is relying on “coercion,” the Middle East expert warned: “Palestinians are unlikely to accept an imposed peace. In fact, US policy risks uniting Palestinian moderates with more radical elements and pushing their confederation into Iran’s open arms.”

After cutting all ties with the US and Israel in February, Palestine resigned from the rotational presidency of the Arab League in September.

London recalled that Iran’s Strategic Council on Foreign Relations predicted in February “that the Occupied Territories will in the future witness a new Intifada against the Zionist regime that will involve more support from Iran than the previous one.”

Trump sees the world through “a transactional optic,” said London, adding Trump’s peace for the land plan has “failed to overcome the innate fears, insecurities, and grievances felt by the parties at hand.”

“In dismissing prevailing historical realities and passions and endeavoring to pick and choose who gets to decide the outcome, Trump and the Gulf states might have instead fueled a more profound threat that extends Iran’s ‘axis of resistance’ directly into their own houses, including a worrisome al-Qaeda component,” he concluded.

Blinken reaffirms US support for Ukraine in call with counterpart