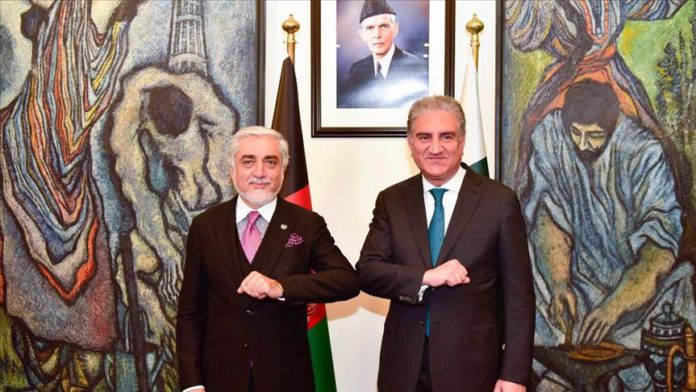 The head of Afghanistan’s High Council for National Reconciliation, who arrived in Islamabad Monday on a three-day visit, said he held a “constructive meeting” with Pakistan’s foreign minister.

“As always had a constructive meeting with HE @SMQureshiPTI, the Foreign Minister of I.R of Pakistan,” Abdullah Abdullah tweeted. “We discussed the #PeaceProcess, the intra-Afghan talks in Doha, & strengthening bilateral relations. I would like to thank HE @SMQureshiPTI for his warm welcome & hospitality.”

Intra-Afghan negotiations to end the 19-year-long conflict began on Sept. 12 in the Qatari capital.

Pakistan’s Foreign Minister Shah Mehmood Qureshi said the Afghan leadership should seize this “historic opportunity” to bring an end to the decades long conflict and secure an “inclusive, broad-based and comprehensive political settlement.”

“He stressed that mistakes of the past should not be repeated; nor past history should dictate the future course of action,” Pakistan’s Foreign Ministry quoted him as saying in a statement.

The foreign minister “underlined that there was a need to guard against the detrimental role of ‘spoilers,’ both within and outside Afghanistan, who do not wish to see return of peace in the region.”

Abdullah also met National Assembly speaker Asad Qaiser, and “acknowledged support Pakistan had rendered during the peace negotiations,” according to a press release.

He will also meet Prime Minister Imran Khan and President Arif Alvi among other high-level officials.

This is Abdullah’s first visit to Pakistan in his capacity as the top Afghan peace negotiator.

Islamabad’s influence over the Taliban is viewed as crucial for peace in the neighboring country.

In December 2018, Pakistan arranged rare direct talks between Washington and the Taliban, which led to a peace deal this year.

Under the agreement, the US committed to withdraw all foreign forces from Afghanistan by July 2021. In return, the Taliban pledged to prevent terrorist groups from using Afghan soil for attacks, and promised to seek reconciliation with other Afghan groups through a dialogue process.