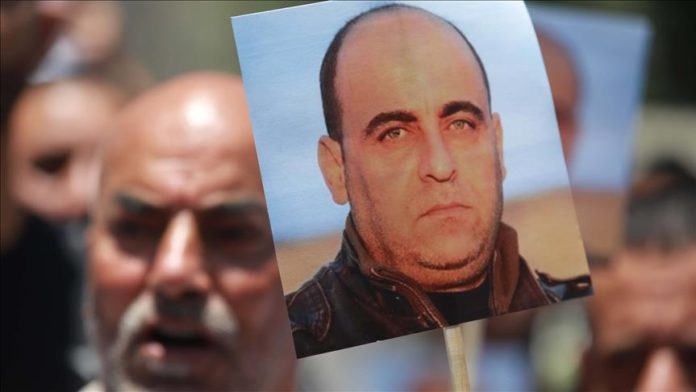 When Nizar Banat hung up with Anadolu Agency reporters early June, he did not know that this interview would be his last before his death in the custody of Palestinian security forces.

Banat, 44, a prominent critic of Palestinian Authority (PA) President Mahmoud Abbas, died in PA custody on June 24. His family accused Palestinian security forces of violently beating him during his arrest.

The death has triggered protests in the Palestinian territories, with Prime Minister Mohammad Shtayyeh ordering the formation of a committee to investigate Banat’s death.

Banat was a staunch critic of the policies of Abbas and the umbrella Palestine Liberation Organization (PLO) and was arrested several times by security forces.

In his last interview with Anadolu Agency two weeks before his death, Banat made his point for his criticism of Abbas’ policies. He argued that the PLO has focused on collecting money instead of rallying support for ending the decades-long Israeli occupation of the Palestinian lands.

“This organization, during the years of establishment, began to collect money and guns at the expense of the liberation of our lands,” he said.

As of 1974, former Palestinian leader Yasser Arafat advocated an end to Palestinian attacks on Israeli targets outside the Palestinian territories. He also campaigned to win world recognition of the PLO as the legitimate representative of the Palestinian people.

“This recognition was not for free,” Banat said. “The price was ending Palestinian operations and starting intelligence cooperation between the PLO and the Europeans in exchange for money. This is what we are suffering from these days under the name of security coordination.”

In 1974, the Arab leaders recognized the PLO as the sole legitimate representative of the Palestinian people. In 1976, the PLO was admitted to full membership in the Arab League.

“Since then, the PLO has lost faith in the liberation of Palestine. Instead, they are trying to obtain political gains and this is our main problem.”

Banat has received death threats over his criticism of Abbas’ decision to cancel the May 22 legislative election and presidential polls on July 31.

Unidentified gunmen even shot at his house in Dura, a town southwest of Hebron. He also received phone calls from Palestinian intelligence officers demanding him to stop his criticism of the PA.

“We have taken the opposition seat because we found the PLO centered on people, not about Palestine or its historical and geographical depth,” Banat said. “You are only allowed to express your viewpoint if you agree to pledge allegiance to a certain person, who is today Mahmoud Abbas.”

Banat believes that the PLO has turned into a “personal property”, leaving Palestinian youths caught between pledging allegiance to certain people or keeping silent.

“We have the right to wonder why the commissions of inquiry into the murders of Majid Abu Sharar, Michiel Nemri, and Hanna Moqbel, who are members of Abbas’ Fatah group have been frozen,” Banat asked.

PLO official Abu Sharar and journalists Nemri and Moqbel were killed in mysterious circumstances outside Palestinian territories during the 1980s.

“The political and military showy scheme of intellectual repression and intimidation in Fatah has led to this situation,” Banat said. “The PLO has become a tool for trading and financial gains, and I, as a Palestinian, do not accept that the Palestinian issue is being put on the back-burner until the PLO is reformed.”

He continued, “Why are we pawning our time for an organization of this kind? Why are we disrupting our issue for this file?”

Critics accuse Abbas of allowing Palestinian political institutions to stagnate. There have been no presidential or parliamentary elections for the PA for more than a decade and a half.

Abbas has conditioned that rival groups Hamas and Islamic Jihad accept peace talks with Israel in order to allow their representation in the PLO.

“It is the right of the two groups to be represented in the PLO based on their political programs, not based on Abbas’ wishes,” Banat said.

Banat believes that the PLO reform has a little chance of success, going on to call for forming a parallel entity and seeking international recognition for it.

“Maybe at some point, the political circumstances will make those who hold this organization beg the resistance to play a role, but I don’t think that will happen because we are talking about a network of financial interests, espionage, security coordination and international relations,” he argued.

Banat added that, “I think that if the resistance can impose itself in battles, eventually Fatah may accept a marginal role in the PLO or at least accept a role that matches its real weight.”