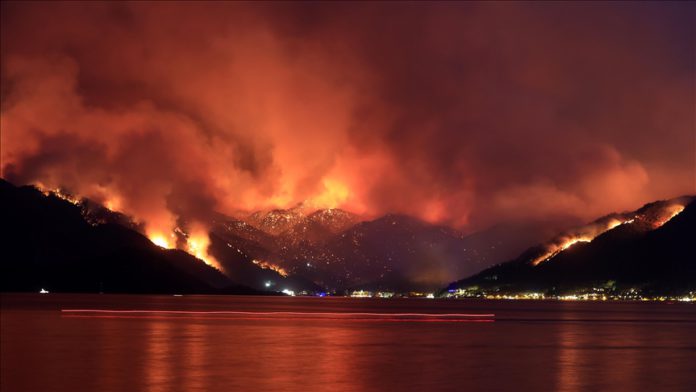 Ninety-eight of 107 forest fires in Turkey are under control, the nation’s Agriculture and Forestry Minister said late Saturday.

Efforts to contain nine blazes are still ongoing, Bekir Pakdemirli said during a news conference at a fire management center in the Degirmenyani district of southwestern Mugla province.

Pakdemirli warned that caution will be needed to combat the massive fires on Sunday when humidity is expected to drop 10%.

He said three firefighting aircraft, nine helicopters, 146 water tenders, 20 water trucks and eight dozers are being used by 529 personnel to extinguish the blaze in Marmaris.

“As the head of an organization that planted 5.5 billion trees, we will plant 1 thousand trees in lieu of each tree burned when the first rains fall,” he said.

The fires started on Wednesday with most in southern regions. At least six people have been killed.

At least 6 dead in fires in Turkey

Blazes broke out in at least 21 provinces, including several Mediterranean provinces, killing at least six people.

As many as 271 other people have been affected by the wildfires, according to the Disaster and Emergency Management Authority (AFAD).

He said Turkey is mobilizing all means to bring the blazes under control.