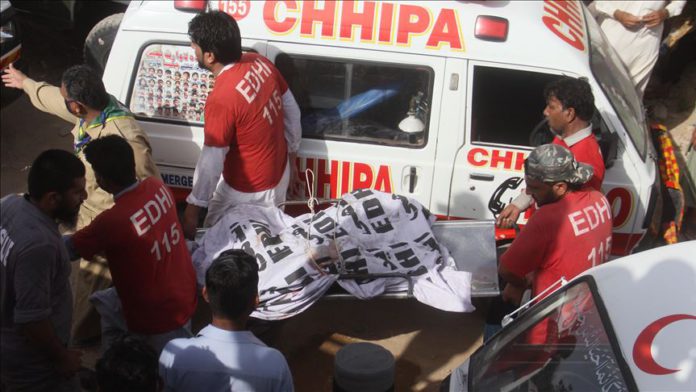 At least 97 people were killed and two survived when a plane crashed in Pakistan’s southern port city of Karachi, the army said on Saturday.

The Pakistan International Airlines (PIA) flight PK-8303, traveling from the northeastern Lahore, crashed Friday into a residential area near Jinnah International Airport while landing with 99 passengers and crew on board, the Civil Aviation Authority confirmed in a statement.

The crash occurred days after the resumption of domestic flights following a month-long lockdown imposed to curb the spread of the novel coronavirus.

Prime Minister Imran Khan ordered an inquiry into the second plane crash since 2016.

The health department in Sindh province, of which Karachi is the capital, confirmed 66 bodies were taken to Jinnah Postgraduate Medical Center and 31 bodies were transferred to Ruth Pfau Civil Hospital. Twenty of the injured are in critical condition and were also taken to Ruth Pfau Hospital.

Two people, including renowned banker Zafar Masood, were confirmed to have survived the crash. Doctors said their conditions are stable.

Nineteen of the dead have been identified but most bodies burned beyond recognition, according to health officials.

Rescue workers backed by the army, and paramilitary troops will continue the rescue and clearance operation to remove the rubble and search for any possible survivor or dead, Pakistan Army said in a statement on Friday.

Rescuers see low chance of anyone being trapped under the rubble as no one from the area is missing. But, they say, there is a possibility of passers-by being killed or injured in the crash.

Officials began to collect DNA samples to identify the deceased.

Among the passengers who headed to celebrate Eid al-Fitr, the holiday marking the end of the Muslim holy month of Ramadan, were 20 women, three children, several army officers, and senior journalist Ansar Naqvi.

Authorities moved dozens of residents to a local hotel after their houses were partially or completely destroyed.

“The plane came down so fast. I could not understand at the first moment what was happening,” eyewitness Rana Jawed told reporters.

The plane caught fire before it fell following a “deafening explosion,” he said.

Honking ambulances and fire brigade vehicles rushed to the scene which the area residents had already crowded.

Army and police personnel reached the site to assist rescue operations but narrow streets hampered the movement of rescue vehicles.

“The plane started to shake close to landing. I thought it was just because of landing. But seconds after, there was a huge blast, and I lost my senses,” Zubair, an engineer who was travelling back home to celebrate the Eid with his family in Karachi, told Geo News from a hospital by telephone. “Everything was smooth and normal until the plane tried to make an emergency landing at a runway but couldn’t make it.”

He said the pilot made an announcement for landing but the plane suddenly glided and hit the buildings.

“There was fire, smoke, and screams all around when I regained my senses. I unfasten my seatbelt, and got out through a broken part of the plane,” he said.

Zubair, who sustained only minor burns, was picked up by area residents who reached the site first and taken to a hospital.

PIA spokesman Abdullah Hafeez told reporters it is early to comment on possible causes for the crash. “The plane was not old and it was well-maintained,” he said.

According to witnesses, the plane crashed a few hundred feet from the runway.

The last contact between the pilot and the control tower was aired on Geo TV and suggested the crash was result of an engine failure.

“I have lost the engine,” pilot Sajjad Gul, who too lost his life in the crash, told the control tower in a Mayday message.

Gul’s last word was “Roger” in response to the control tower’s directive that two runways are open for emergency landing.

Khan and other officials expressed grief for the loss of lives.

“Shocked, and saddened by the PIA crash. Am in touch with PIA CEO Arshad Malik, who has left for Karachi, and with the rescue and relief teams on the ground as this is the priority right now. Immediate inquiry will be instituted. Prayers & condolences go to families of the deceased,” Khan said in a Twitter post.