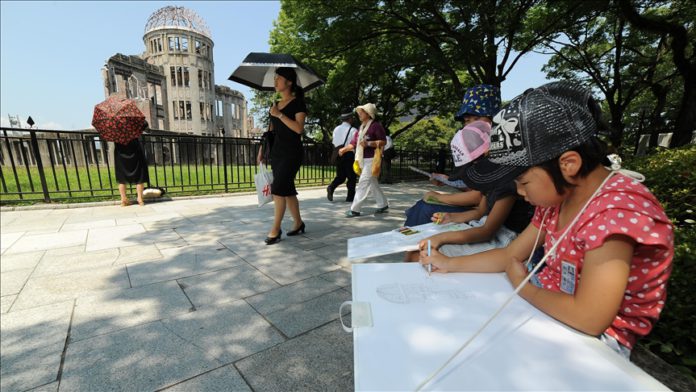 TOKYO (AA) – It has been 76 years since the US dropped atomic bombs on Hiroshima on Aug. 6 and Nagasaki on Aug. 9 in 1945 during World War II in the Pacific.

The bombs contained enriched uranium and had a blast yield of 13 kilotons of TNT.

While many died without getting medical support, those who went to the city for help died from radioactive rain.

It is known that the reason then-US President Harry Truman ordered the use of atomic bombs was to offset the Soviet threat in East Asia and Eastern Europe, as well as to make a show of strength to the USSR.

In July 1945, the US, UK, and China issued the Potsdam Declaration that demanded Japan’s surrender. But, Japan refused to do this unconditionally.

At the beginning of August, Japan made a “negotiated peace” offer to the Allied front but it was not accepted. Hiroshima was destroyed by the atomic bomb dropped on Aug. 6.

In a message on Aug. 15, Emperor Hirohito of Japan declared his country “surrendered unconditionally,” stating that “war would devastate the Japanese people.”

While the Americans announced that the death toll from the atomic bombings was 117,000, the Japanese said it was close to half a million. Survivors called “Hibakusha,” suffer from cancer, disfigurement, and hard-to-treat diseases.

The Hibakushas, whose numbers have dwindled, deliver a message on giving up nuclear weapons at commemorations held every August.

The atomic bomb, considered the breaking point of the war, forced Japan to surrender and led to a watershed in international relations.

The US and the Soviet Union constructed the means to mount more powerful hydrogen bombs they developed up to 1950 on intercontinental ballistic missiles.

The bombings ushered in the age of excessive force capability, casting the shadow of nuclear war from 1960 to 1990.

During the Cold War, the two nuclear powers — the US and USSR — did not dare to directly declare war on each other.