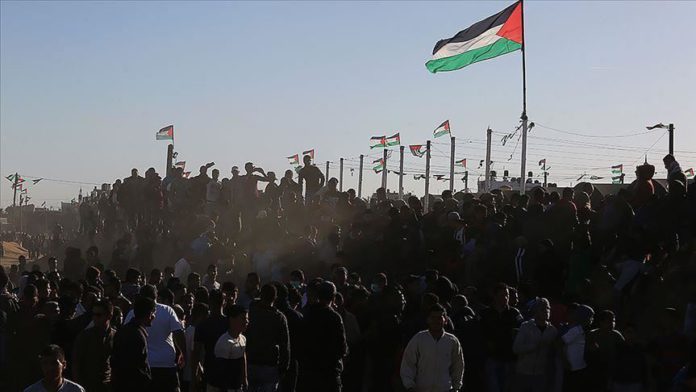 On May 15 each year, Palestinians commemorate Nakba Day to reaffirm the right of return to ancestral lands that are now part of Israel.

However, the outbreak of the novel coronavirus has forced this year’s activities on Friday online.

Palestinians use the term “Nakba,” meaning “catastrophe” in Arabic, to refer to 1948 expulsions by Zionist gangs in historical Palestine.

In 1948, the new state of Israel was declared on the majority of historical Palestine, after nearly 800,000 out of 1.4 million Palestinians were displaced from their homes to the West Bank, Gaza Strip and neighboring Arab countries.

The Palestinian cause is today exposed to unprecedented risks as Israel is expected to annex over 30% of the occupied West Bank on July 1, as agreed between Prime Minister Benjamin Netanyahu and head of the opposition Blue and White party Benny Gantz, currently forming a unity government.

Palestinians this year will refrain from mass gatherings to remark the 72nd anniversary of the Nakba Day and events will be limited because of the coronavirus pandemic, according to Mohamed Alyan, coordinator of the National Committee for the Commemoration of the Nakba.

“This year’s program will be limited to events like virtual demonstrating on social media, raising flags on homes and laying a wreath at the tomb of late President Yasser Arafat,” Alyan said.

He pointed out that vehicles carrying speakers will roam the streets of West Bank cities, camps and towns and play national anthems.

“Despite the coronavirus pandemic and the risks of organizing mass events, there must be a real confrontation on the ground to prevent Israel from annexing Palestinian territories,” Alyan added.

On Wednesday Palestinian President Mahmoud Abbas reiterated the intention of the Palestinian leadership to review all agreements and understandings, with Israel and the US, if Israel announced the annexation of any part of the West Bank.

“We will be free from all agreements and understandings with them,” he said.

There are now 13.4 million Palestinians, with more than half living in historical Palestine, which includes the West Bank, Gaza Strip and Israel, the PCBS announced on the occasion of the Nakba earlier this week.

According to the UN refugee agency UNRWA, the number of Palestinian refugees reached 5.6 million in 2019 — almost a third of the already registered Palestine refugees.

However, these estimates represent the minimum number of Palestinian refugees, as the census does not include those who were displaced from 1949 until the Arab-Israeli war in June 1967 and those deported in its aftermath.

The PCBS said 28.4% of Palestinian refugees are scattered across 58 UNRWA-run camps — 10 camps in Jordan, nine in Syria, 12 in Lebanon, 19 in the West Bank and eight in Gaza.

Refugees make up 43% of all Palestinians living inside Palestine, it said.

The PCBS said more than 100,000 Palestinians were martyred by Israeli fire since 1948 and one million others arrested since 1967.

The Palestine-Israel conflict dates back to 1917 when the British government, in the now-famous Balfour Declaration, called for “the establishment of a national home for the Jewish people in Palestine.”

The Palestinian diaspora has since become one of the largest in the world.