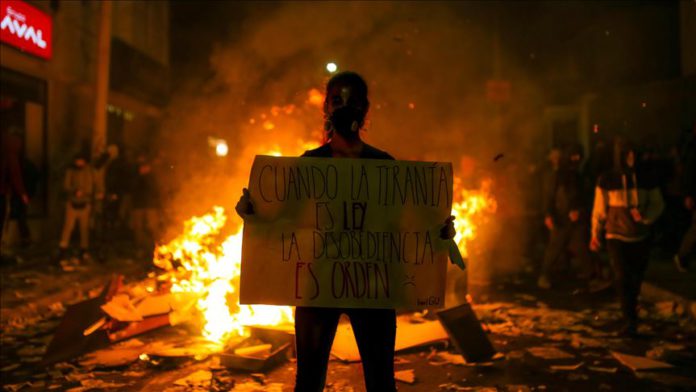 Seven people died and more than 140 were injured Thursday in protests following the death of a civilian at the hands of Colombian police.

A total of 53 police stations and 77 cars were damaged after clashes erupted between protesters and security forces, mainly in Bogota.

The unrest followed the death of Javier Ordonez, 44, and father of two, who was writhing in pain as two police officers used a taser while pinning him to the ground with their knees.

According to his friends, he was on the street drinking alcohol, which was a violation of quarantine restrictions amid the coronavirus pandemic.

Ordonez was taken to a police station where friends and family allege he was subjected to further abuse.

He later died in a hospital.

The officers have been suspended while an investigation is underway, authorities said.

President Ivan Duque and Bogota Mayor Claudia Lopez condemned the “abuse of human rights by members of the public force.”

The video is reminiscent of Dilan Cruz, a teen who died last November in Bogota during protests after being hit in the head by a projectile fired by police.