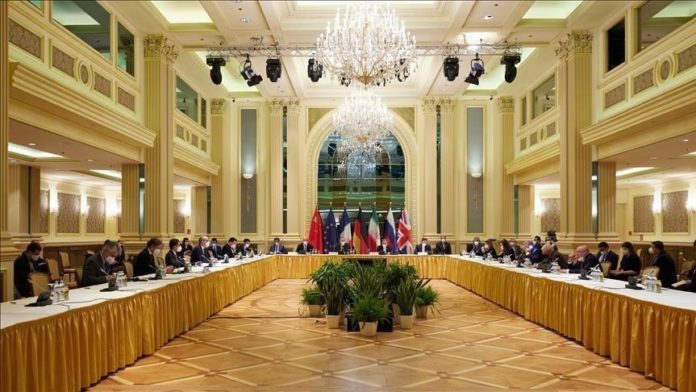 In January 2016, six months after a landmark nuclear deal was signed between Iran and six world powers in Vienna, the sanctions-battered country heaved a sigh of relief as an international embargo was lifted.

The much-touted “implementation” of the Joint Comprehensive Plan of Action (JCPOA) opened a new chapter in Iran’s relations with the West after the UN nuclear agency paved the way for Tehran’s reintegration with the global economy by confirming its compliance with the July 2015 deal.

The lifting of sanctions under the accord, which then-Iranian President Hassan Rouhani hailed as a “glorious victory,” saw billions of dollars of Iranian assets being unblocked and oil being shipped overseas after years of a crippling blockade.

“It was a watershed moment in Iran’s post-1979 history, a diplomatic feat of massive significance,” Tehran-based strategic affairs analyst Morteza Alizadeh told Anadolu Agency, calling it a “win-win proposition” for both sides.

Under the deal, Iran was obliged to limit its uranium enrichment to 3.67% purity, reduce the number of centrifuges, avoid uranium production at the Fordow nuclear facility and disable the original core of the Arak nuclear reactor, among other measures.

In return, the UN was supposed to terminate all previous resolutions targeting Iran’s nuclear program and the US and EU were required to lift sanctions and remove designations of certain Iranian individuals and entities.

“The agreement with six world powers increased Iran’s weight and influence in the region, and opened new avenues of economic cooperation in various fields,” said Hassan Beheshtipour, policy analyst at the Institute for Iran-Eurasia Studies.

But the relief turned out to be short-lived as former US President Barack Obama’s Republican successor, Donald Trump, in May 2018 decided to pull Washington out of the deal, followed by the imposition of unprecedented sanctions under the so-called “maximum pressure” campaign.

The unilateral move, Beheshtipour notes, forced many foreign companies to hastily leave Iran out of fear of US sanctions.

“They had to choose between working with the US or Iran, and it was natural that they chose the American side because it had far greater benefits for them,” he told Anadolu Agency.

In and out of JCPOA

The historic nuclear deal that was implemented in January 2016 was the result of marathon talks lasting several months in the Austrian capital where efforts are now underway to revive the accord.

The effect of the deal was immediately felt in Iran. In fiscal year 2016/2017, the country’s economy grew 12.5%, while inflation dropped to 7.5% from around 40% in 2013. It was mainly fueled by the surge in oil exports and foreign investments in the Iranian market.

Barely two months after the deal was put in motion, Iran attracted $9.5 billion in foreign investments, as per official figures.

Ali Mehran, a veteran journalist and editor at Iran’s state-run newspaper Iran Daily, said the sanctions reprieve allowed Tehran to “reconnect” with the international community and “engage in trade” with the world.

“Most important, of course, was for Iran to sell its oil, which is its main source of foreign currency,” Mehran told Anadolu Agency.

The post-JCPOA economic recovery of Iran was notably attributed to its oil and gas trade, both of which rose to pre-2012 levels following the implementation of the nuclear agreement in 2016. In fiscal year 2017-2018, before the US withdrew from the deal, Iran’s oil and gas export revenues soared to about $63.7 billion.

The reimposition of sanctions in May 2018, especially those targeting the energy and financial sectors, halted the country’s economic recovery as foreign firms and countries washed their hands off Iran.

“All hopes were gone after Trump withdrew from the deal, as things went from bad to worse,” said Mahjoob Zweiri, director of the Center of Gulf studies at Qatar University, adding that the “maximum pressure strategy” has “tripled economic pressures” on Iran.

Since last April, hectic efforts have been underway between Iran and world powers — with the indirect participation of the Americans — to salvage the 2015 deal and to de-escalate tensions in the region.

Marathon talks were paused in June after six rounds, following the change of government in Tehran. The new Iranian team came with a drastically new roadmap after reconvening in Vienna in November.

In the latest round, which is currently underway, Iran has provided revised drafts on sanctions removal, verification, guarantees and nuclear commitments to other parties with Iran’s lead negotiator Ali Bagheri saying the “ball is in the US’ court.”

Mehran said there is “basic mistrust” on both sides which serves as an “obstacle in (the) revival of the deal.”

Middle East researcher and commentator Behrouz Shabani echoes Mehran and said indecision about “who will make the first move” is delaying the outcome.

“There are many bottlenecks but the most critical is (a) trust deficit between the two sides,” he told Anadolu Agency. “For example, Americans continue to sanction Iranians, while seeking rapprochement in Vienna.”

So far, US President Joe Biden’s administration has refused to give commitments on lifting sanctions or guarantees that a future US government will not undo any agreement reached in Vienna.

On the other hand, Iran has continued to ramp up its nuclear activities while holding large-scale military drills in recent months, which some see as an attempt to gain leverage in the talks.

Meanwhile, the Americans are pushing Iran to finalize talks in a time-bound manner, warning that the “window for diplomacy is closing.”

Iran, however, has rejected what it calls “manufactured deadlines,” saying it wants “result-oriented talks.”

“The US seeks JCPOA+ and to discuss other disputed issues with Iran, but since Iran does not trust the implementation of agreements, it is seeking an executive agreement within the framework of JCPOA,” said Beheshtipour.

On an optimistic note, he believes that ongoing negotiations, although prolonged, will “surely come to fruition.”