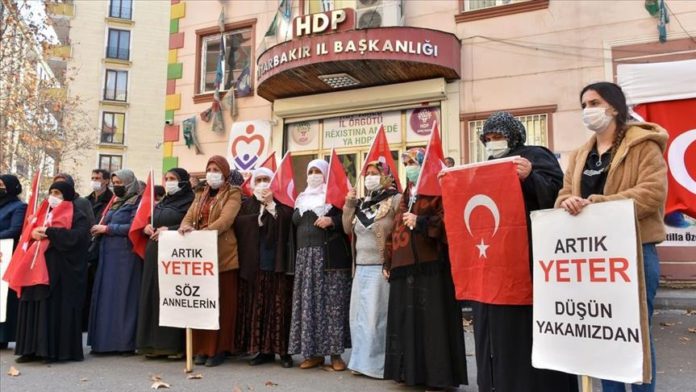 Dozens of families have been staging a sit-in outside a political party’s office in Turkey’s southeastern province of Diyarbakir for 550 days in pursuit of their sons and daughters forcibly abducted or recruited by the PKK terror group and its Syrian branch YPG.

The protest first sparked on Aug. 22, 2019, after mother Hacire Akar — whose elder son was abducted by the terror group in 1994 and lost his life in 2017 — learned her younger son Mehmet was also taken to the mountains by terror affiliates just ahead of his wedding.

Furious over her experience and fearing Mehmet would meet the same fate as his elder brother, the mother decided to take the matter into her own hands and rushed to the Peoples’ Democratic Party (HDP) office in Diyarbakir. The Turkish government accuses the HDP of having links to the YPG/PKK terror group and protesting families blame the party for playing a role in recruiting their children.

Accompanied by two relatives, mother Akar began her protest and said she would not leave until her son was brought back. Her determination and the anti-terror unit’s strife eventually bore fruit, and Mehmet was brought back on Aug. 24.

Akar became a source of inspiration for scores of other families believing the HDP was responsible for the disappearance, abduction and forced recruitment. Three mothers — Fevziye Cetinkaya, Remziye Akkoyun and Aysegul Bicer — claiming their children were abducted — started their sit-in on Sept. 3, 2019. The protest outside the office has been growing ever since.

So far, 212 families have joined the sit-in and dozens are still staging the protest every day. Their efforts have not been in vain, as 24 of their children have laid down their weapons and surrendered to Turkish authorities. Those who surrender to the Turkish state are eligible for sentence reductions under a repentance law.

Although media organs linked to the terror group sought to damage the families’ reputation and depicted them as targets, the families remained undaunted and did not stop their protest for the sake of their beloved children, most of whom were tricked into joining the terror group at an impressionable age, some as young as 8 years old.

Although some families risked going to the northern Iraqi and Syrian regions, where terror groups have a presence, to bring back their children, they were turned away and even beaten in many cases.

In mid-February, the Turkish Ministry of National Defense announced that 13 bodies, mostly Turkish citizens, were found in a cave complex captured from PKK terrorists in northern Iraq’s Gara region. Among the hostages executed by terrorists were seven relatives of the protesting families. The incident demoralized the protesting families. However, they quickly recovered and stay more determined than ever.