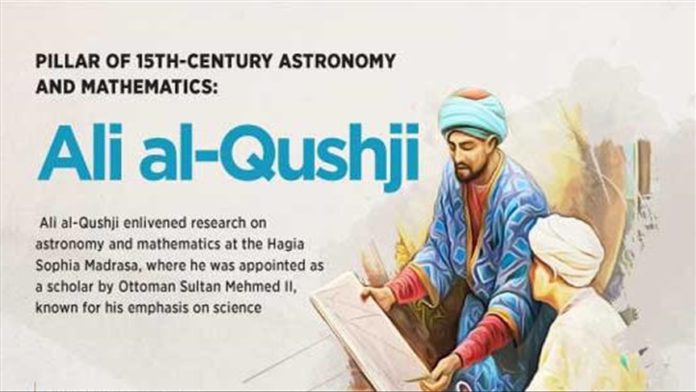 Wednesday marks the 546th anniversary of the death of Ali al-Qushji, a Turkish astronomer, mathematician and linguist.

According to the historical sources, al-Qushji, whose real name is Ala al-Din Ali, is rumored to be born in Samarkand, Uzbekistan early 15th century, although the exact place and date of birth are not known.

It is thought that the title of al-Qushji derived from the Turkish word kuscu — birdman in English — as his father was the chief falconer in the court of the local ruler Ulugh Beg.

Growing up in Samarkand during the Timurid Dynasty, al-Qushji was taught in mathematics and astronomy by Qazi Zadeh al-Rumi, Ghiyath al-Din Jamshid al-Kashani and Ulugh Beg.

When he returned to Samarkand, al-Qushji presented his work titled Hall-e Eshkal-i Ghammar (Explanations on the Periods of the Moon) to his master Ulugh Beg, who was impressed by the work.

Al-Qushji was sent to China by Ulugh Beg and compiled another work during this visit.

Upon the death of Ulugh Beg, al-Qushji went to Tabriz, Iran and met Uzun Hassar, the ruler of the Turkmen dynasty Ak Koyunlu.

Uzun Hasan sent him as an ambassador to the Ottoman Sultan Mehmed II, commonly known as Mehmed the Conqueror, to mediate between the two emperors.

Impressed with his wisdom, Mehmed II persuaded al-Qushji to stay in Istanbul.

Ali al-Qushji enlivened research on astronomy and mathematics at the Hagia Sophia Madrasa, where he was appointed as a scholar by Mehmed II, known for his emphasis on science.

He corrected Istanbul’s longitude from 60 to 59 degrees and determined the latitude of the city as 41 degrees 14 minutes.

His works can be listed under three categories: astronomy-mathematics, kalam and fiqh, and linguistics.