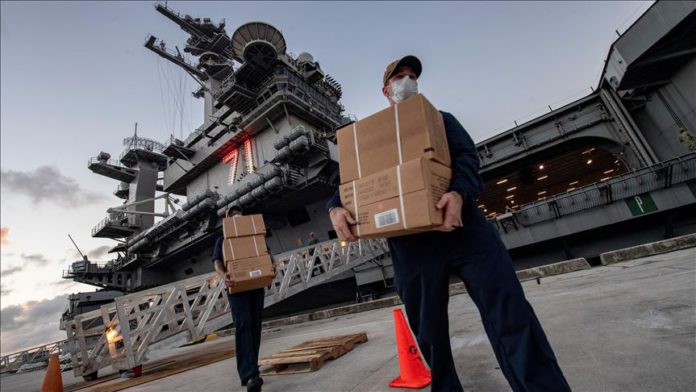 Five sailors have again tested positive for the novel coronavirus after returning to the USS Theodore Roosevelt from quarantine, according to reports on Friday.

The exact figure could not be immediately verified, but multiple reports cited the figure from a statement issued by Navy spokesman Cmdr. Clayton Doss. Doss reportedly also said “a small number of other Sailors who came in close contact with these individuals were also removed from the ship and tested.”

Those individuals will also be quarantined pending their re-test results, Doss added, according to the Navy Times.

Pentagon Spokesman Jonathan Hoffman said a “few” sailors tested positive after displaying symptoms and alerting the medical crew on the ship. They were then removed from the aircraft carrier and quarantined while the Navy conducted “tracing” of people they may have come into contact with aboard the ship.

The Roosevelt is one of two deployed Navy ships that have experienced coronavirus outbreaks. The USS Kidd is the other vessel.

“It’s a stubborn disease. We’re learning a lot. We’re taking every step possible to get the ship fully-clean and fully-ready,” he said, maintaining the Roosevelt could “be at sea tomorrow if called upon and would be able to fight through this outbreak.”

“But we do want to get to a place where there are zero infections on this ship, and the entire ship’s compliment is back at sea, and that may take a little bit more time,” added Hoffman.

The New York Times first reported that at least one sailor aboard the Roosevelet re-tested positive for the coronavirus.

The Roosevelt has been at port since March when the outbreak was first detected.

The Navy stopped updating the number of cases on board the ship at the end of April.

George Floyd protests continue in US

Trump says US police will not be disbanded, defunded