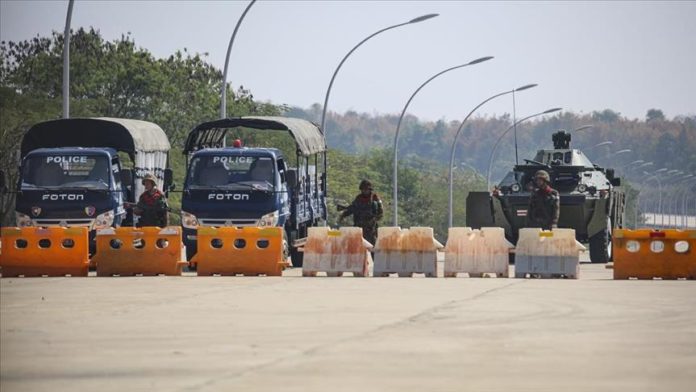 YANGON, Myanmar (AA) – A street protest was erupted in Myanmar’s second largest city Mandalay on Thursday, the first such response after the military’s coup in the country.

At least 20 students and activists gathered near the University of Medicine in Mandalay on Thursday to protest the military that staged the coup overthrowing the civilian government.

They dispersed after 20 minutes of waving banners and chanting anti-coup slogans, with protests also live-streamed on Facebook.

A university student, among those participated in the protest, told Anadolu Agency that five people have been detained by the police.

“Three are university students and residents of Mandalay. Two are youth activists from other regions,” he said over the phone Thursday on condition of anonymity.

The protest was the first such move of resistance since the military staged the coup on Monday.

“We don’t recognize the new regime. We strongly opposed the military coup,” he said.

“We just show a non-violent resistance. We peacefully protested today, but our colleagues were arrested after the protest. Military regime is showing its true color,” he said.

The protests were live-streamed on Facebook, the most popular social media platform with over 22 million users in Myanmar.

People in Myanmar however still have access to it through virtual private network applications.

​​​​​​​‘We do not need a dictatorship,’ Yangon resident says

Some of them posted videos of themselves and different residents bashing cookware repeatedly and shouting anti-coup slogans from their balconies or house yards.

They also put the hashtags #Save Myanmar and #VoiceOutforDemocracy in their posts.

“We showed our nonviolent resistance against the military acts by clattering our pots or pans. It is also our way to show support for democracy,” said a Twitter user.

“We do not want to go back to those days when our eyes were blinded. We have to fight for the future. We do not need a dictatorship,” Yaw Seing Paing (@PaingYaw) tweeted.

Beating tin or metal buckets is a Myanmar tradition to drive away evil or bad karma.

A number of Yangon residents also honked their cars, while some others sang the nationwide anthem.

Myanmar’s military ousted the country’s de facto leader Aung San Suu Kyi, with a bloodless coup on Monday, arresting her and other senior members of her ruling National League for Democracy party.

The military claimed the coup was staged due to “election fraud” in the polls that it said resulted in the dominance of the ruling party in the parliament.