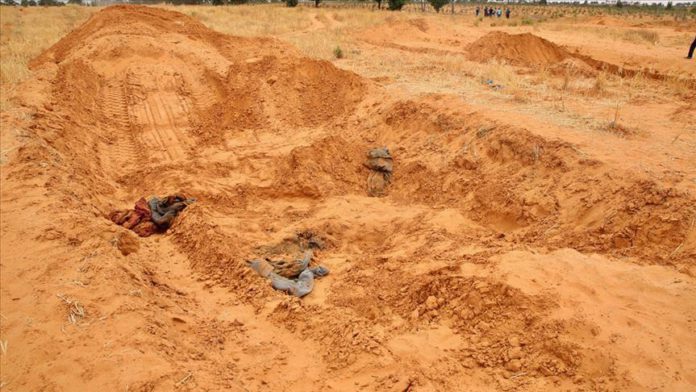 Forty-eight bodies were dug up from mass graves in Tarhuna city, Libya, an official said on Wednesday.

Libyan Deputy Interior Minister Mohammed al-Madaghi told reporters “the mass graves that were discovered in Tarhuna, are not an easy number, and cannot be passed on or forgotten, and it will remain stuck in the memory of the relatives of the victims, and in the Libyan and humanitarian memory as a whole.”

He said that the number of recovered bodies reached 48 so far, in addition to a number of body parts, as the Interior Ministry is currently taking DNA samples to identify the unknown bodies.

Tarhuna was the last stronghold in western Libya controlled by militias loyal to renegade general Khalifa Haftar before being recaptured in early June by forces allied with the Tripoli-based government.

Libyan authorities announced that international efforts are underway to establish a fact-finding committee to investigate the violations of Haftar’s militias planting mines and digging mass graves as well as other violations in Tripoli and Tarhuna.