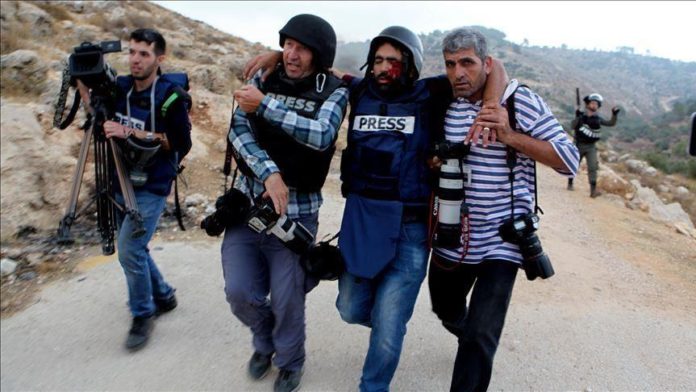 An Arab journalists’ rights group has recorded 46 of Israeli violations of Palestinian media freedoms in January.

In a report on Wednesday, the Journalists’ Support Committee, which documents media violations across the Palestinian territories, said the Israeli violations varied between “arrest, extortion and direct field assault” of media personnel among other forms of harassment.

According to the NGO, four Palestinian journalists were arrested by Israeli forces last month.

It noted that the Israeli army and settlers committed “17 cases of assault and injury against journalists” during their coverage of the demolition of Palestinian homes in the occupied East Jerusalem’s Sheikh Jarrah neighborhood and rallies in the West Bank.

The NGO also documented 18 cases of journalists being blocked from covering Israeli violations against the Palestinians.

According to the report, Israeli forces raided the house of one journalist, threatened two female journalists, while restricting the social media accounts of four others for “violating publishing instructions.”

Last month, the NGO said that 17 Palestinian journalists and media workers were held in prison by Israel.

Pakistan: Accused in US reporter murder to stay in jail