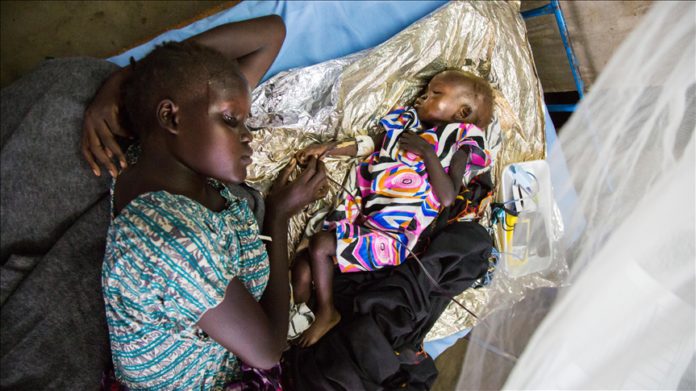 The UN World Food Program (WFP) warned Friday that the number of people teetering on the brink of famine has risen from 34 million projected at the beginning of the year to 41 million as of June.

WFP spokesman Tomson Phiri told journalists at the UN in Geneva that the world is no longer moving towards Zero Hunger.

More than 270 million people are estimated to be acutely food insecure or at high risk in 2021.

“WFP’s latest Global Operational Response Plan finds that famine, driven by conflict and fueled by climate shocks and the economic downturn caused by COVID-19 could soon become a reality for millions of people,” said Phiri.

“Without immediate emergency food assistance, they too face starvation as the slightest shock will push them over the cliff into famine.”

This year, some 584,000 people will likely face famine-like conditions in Ethiopia, Madagascar, South Sudan, and Yemen.

Nigeria and Burkina Faso are also of particular concern because they have had pockets of people in the top level of measuring hunger known as IPC 5 or the catastrophe zone in recent months.

“We are extremely concerned about the world’s most vulnerable people as food prices continue to rise globally,” said Phiri.

He said WFP is undertaking the most extensive operation in its history, targeting 139 million people this year.

The agency foresees significant scale-ups across areas of concern such as Ethiopia, Lebanon, Afghanistan, Sudan, and Syria.

To do this, WFP needs $5 billion in 2021 to avert famine and meet the urgent food and nutrition needs of those people most at risk.

“The price of doing nothing is exponentially higher. The $5 billion for famine mitigation is approximately one-third of WFP’s total resourcing needs of $15 billion for 2021,” said Phiri.

“Famine also has a long-term economic impact, from lost productivity to spiking health care costs – not to mention the incalculable cost of losing the human potential of whole generations and crippling a nation’s future,” he added.

“But the situation in 2021 is not business as usual. It is getting worse. And while overall we have not registered, diminished contributions from donors, the needs outstrip the available resources.”

WFP warned that significant funding shortfalls across East and Southern Africa, as well as the Middle East, have forced ration cuts upon some of the world’s most vulnerable people who rely on WFP food to survive.

In East Africa alone, almost three-quarters of refugees have had their rations cut by up to 50%.

“Significant funding shortages for the Syria Regional Refugee Response mean 242,000 refugees in Jordan may be cut off from assistance at the end of August unless more funding is received,” Phiri said.