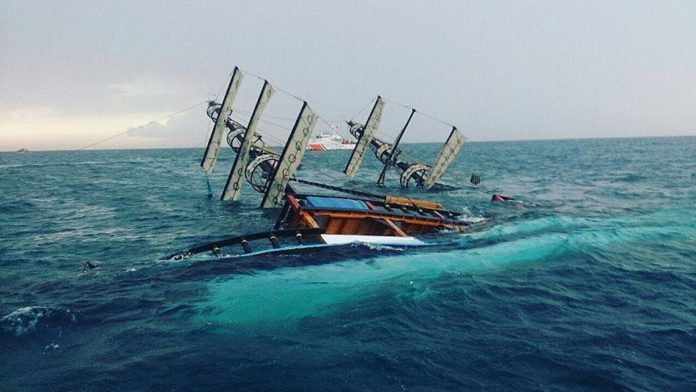 At least 41 people drowned when a boat capsized in the Central Mediterranean on Feb. 20, the UN’s refugee and migration agencies said on Wednesday.

The UNHCR team in Sicily said it has gathered testimonies from survivors about the shipwreck that took place two days after a dinghy with 120 people left Libya on Feb. 18.

The people on board included six women, one of whom was pregnant, and four children, the International Organization for Migration (IOM) and the UNHCR said in a joint statement.

The agencies are currently waiting for 77 survivors to be disembarked from a commercial vessel, Vos Triton, in the Sicilian port of Porto Empedocle.

According to the survivors, the dinghy started to take in water about 15 hours after setting off from Libya.

At least six people died after falling into the water, while two others tried to swim to a boat visible in the distance and drowned.

After about three hours, the Vos Triton approached the dinghy to carry out a rescue, but many more people lost their lives in the difficult and delicate operation, the IOM and UNHCR reported.

Only one body has been recovered and the missing include three children and four women, one of whom left behind a newborn baby currently on the tiny Italian island of Lampedusa.

“Saving the lives of refugees and migrants in distress in the Mediterranean must once again become a priority for the European Union and the international community,” read the statement.

Some 160 people have died in the Central Mediterranean since the start of 2021, according to data collected by international organizations.

Tens of thousands of migrants travelling along the route through Libya to the Central Mediterranean have fallen victim to unrelenting brutality at the hands of traffickers and militias.

According to data collected by the IOM, more than 3,580 people were intercepted at sea and returned to Libya in the same period.

The IOM and UNHCR reiterated that Libya cannot be considered a safe port and that every effort must be made to ensure that people rescued at sea are not sent back to the country.