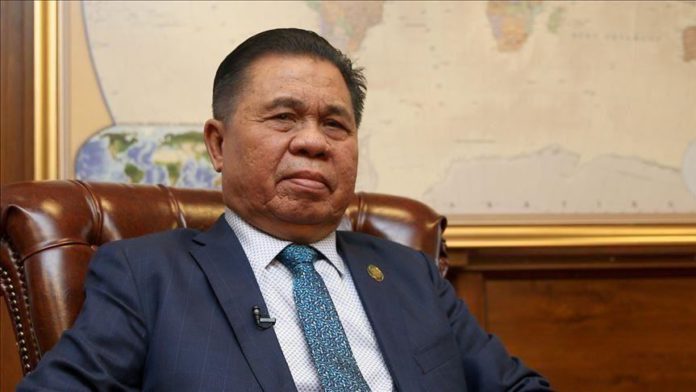 A four-point program helped the Moro people living in the southern Philippines achieve their goal, said the chief minister of the Bangsamoro Autonomous Region in Muslim Mindanao (BARMM).

“We promoted consultative and collective leadership in running the affairs of the organization,” said Ebrahim, who is a trained civil engineer.

“We also procured weapons and other military equipment from abroad through our self-reliance and also managed to establish our factory of arms inside the jungle producing small arms and even rifle grenade launchers or RPGs including its ammunition,” he said.

“We agree and formed our negotiating panel and signed a ceasefire agreement,” said Ebrahim while addressing an online audience from over a dozen countries.

The two sides reached a 9-point agreement including solving the Bangsamoro problem.

“But during negotiations [former Philippines] President [Joseph] Estrada announced an all-out war against our forces thus ending the peace talks and thereafter hostilities resumed in the Bangsamoro homeland,” he said.

Ebrahim said the negotiations with the Manila government resumed after Estrada’s exit from power with a condition that there will be third party intervention – Malaysia. “There was an agreement that all talks will be conducted outside the Philippines,” he added.

The two sides held talks in Tokyo, Japan in 2012 to fast track the process.

In 2014, two sides again met in Manila, however, the agreement reached between the two sides needed to be translated into law but it was not approved by the Philippines Congress.

“Under current President Rodrigo Duterte, negotiations continued and after he won, he continued the negotiations and in 2019 the Bangsamoro Organic Law was passed in the Philippines Congress,” he said.

“The law was approved by a majority through a plebiscite creating what is now the Bangsamoro Autonomous Region in Muslim Mindanao, composed of five provinces and three cities,” he explained.

The Bangsamoro chief minister also advocated for a “meaningful autonomy” status to people of Kashmir – a disputed territory between India and Pakistan who are fighting for right self-determination.

“The issue of Kashmir is very, very challenging because we have one country, India, not very eager to grant autonomy to Kashmir,” he said.

He said Moro people know “hardship and difficulties people of Kashmir are facing”.

“I think there must be enough mobilization of the Islamic world to pressure the Indian government to give, at least, meaningful autonomy to Kashmiri people,” the Bangsamoro leader said.