TurkishPress
Home News 4 out of 5 people in UK age 16 and over fully... 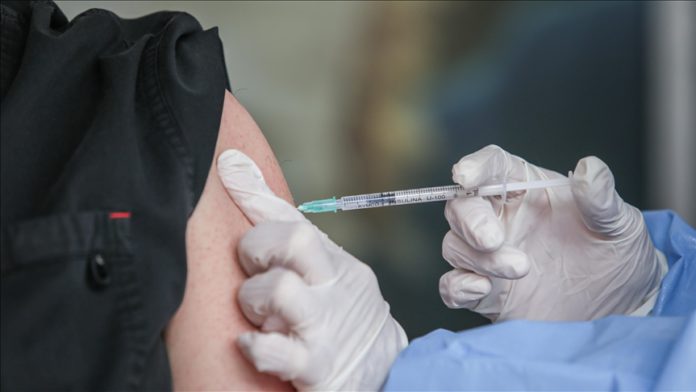 Four in five people in the UK age 16 and over have now been fully vaccinated, the government said Tuesday as it prepares to launch a new campaign to boost inoculation rates.

More than half of all 16- and 17-year-olds in England alone have already received their first jab just a month after they got the green light, said the Department of Health and Social Care. Overall, over 48 million people have received their first dose, while over 43 million have gotten the second.

“It is a phenomenal achievement that four in five adults across the UK have now received both COVID-19 vaccines, which have built a wall of defence around the UK and are allowing us to live safely with this virus,” Health Secretary Sajid Javid said in a statement.

“Getting your vaccine has never been easier, and I urge everyone to continue to play their part by getting the jab to protect themselves, their families and their communities,” Javid added.

Capitalizing on the high uptake of vaccines among young people, the government has also launched a campaign to further boost this uptake. The program will target all under-18s and their parents and will be supported by the use of social media and its various platforms, including TikTok and MTV.

Facebook, Instagram and Snapchat as well as major radio stations will take part in the campaign to encourage more young people to get the jab and to dispel anti-vax theories in the UK. As the elderly population has now been inoculated, younger people are now more vulnerable to the virus, as many have yet to take the vaccine.

The latest analysis from Public Health England (PHE) and Cambridge University has shown that vaccines have saved more than 105,000 lives and have prevented 143,600 hospitalization as well as 24 million cases across England.

Furthermore, PHE research has also shown that vaccines are highly effective against hospitalizations brought on by the deadly Delta variant with the Pfizer vaccine offering 96% efficacy and the Oxford vaccine 92% after two doses.

Despite the optimistic outcome of the vaccines, cases across the UK continue to climb. On Tuesday 37,489 people had a confirmed positive test result. Today’s figure brings the week’s total number of people to have tested positive to 269,193, up 13.9% from the previous week.

Romania: FETO school manager to be tried with bribery