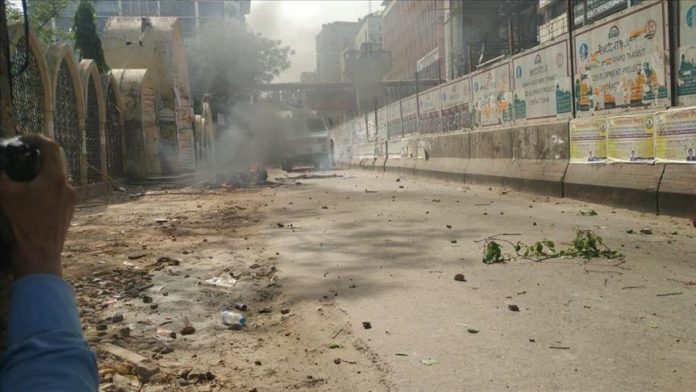 At least 14 people have died and over 100 others injured in three days of violence in Bangladesh as security forces cracked down on protesters demonstrating against Indian Prime Minister Narendra Modi’s visit to mark the country’s 50th anniversary.

Protests raged across Bangladesh against Modi but also over the killings of protesters against his two-day visit.

Four supporters of the Hefazat-e-Islam group were killed on Friday after police opened fire in the southeastern town of Chittagong.

On Saturday, hundreds of its members protested the deaths of their supporters.

At least four more people died on Sunday in clashes between police and demonstrators as the group called for a dawn to dusk strike, a group leader said.

Three workers were shot dead in the eastern district of Brahmanbaria, and one in Dhaka, Azizul Haque Islamabadi, the group’s joint secretary general, told Anadolu Agency. “The government has set an example of state-oppression against its own citizens by killing our people. It’s not tolerable.”

Underlining the situation as “unexpected,” he said: “It must be changed… we never expect that in a democratic state… people are being killed by security forces for holding protests.”

Sporadic clashes were reported from different parts of the country during the strike that left dozens injured.

Train and road communications were also disrupted for hours between Dhaka and the country’s eastern and east-southern divisions.

Home Minister Asaduzzaman Khan Kamal at a press briefing warned of stern action if violence did not stop.

Meanwhile, Facebook and Messenger remained restricted in Bangladesh for a third day.

“We’re aware that our services have been restricted in Bangladesh. We’re working to understand more and hope to have full access restored as soon as possible,” said a company spokesperson.