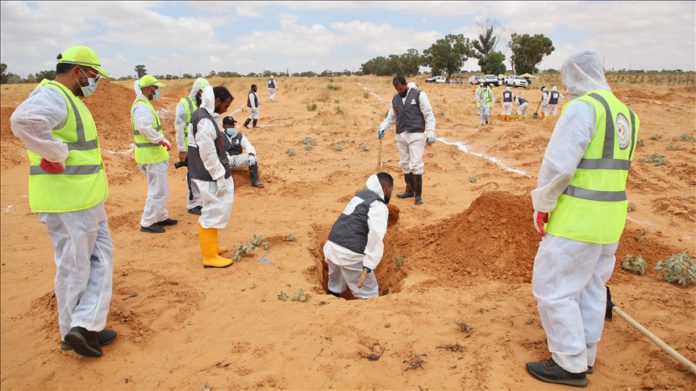 Libyan authorities on Saturday discovered a new mass grave in the city of Tarhuna, 90 kilometers (56 miles) northeast of the capital Tripoli, likely committed by militias of retreating warlord Khalifa Haftar.

“Four bodies were exhumed from the grave in Alrabet 2 project area in the city,” Lutfi Tawfiq, the director of the General Authority for Research and Identification of Missing Persons, told Anadolu Agency.

Tarhuna city was a previous stronghold for al-Kani militia affiliated with Haftar.

According to Libyan official sources, Haftar’s forces and affiliated militias committed war crimes and acts of genocide in the period between April 2019 and June 2020.

Since June, following the defeat of Haftar’s forces in the western areas of Libya, the Libyan government found around 300 dead bodies in mass graves in Tarhuna and south of Tripoli.

The Libyan government has been battling Haftar’s forces since April 2019 in a conflict that has claimed thousands of lives.

On Oct. 23, the warring parties agreed on a cease-fire under UN mediation to pave the way for a political dialogue and settlement. However, Haftar militias have regularly breached the cease-fire.