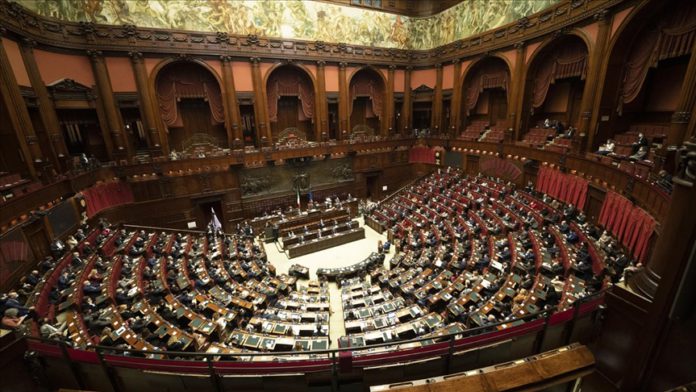 Italy’s parliament held Wednesday a third day of inconclusive voting on a new president, as parties continued to spar over the appointment that was once seen as a shoe-in for Prime Minister Mario Draghi.

Draghi, the respected former president of the European Central Bank, is still a contender, but many lawmakers are reluctant to back him. One of his most credible rivals for the presidency is Pier Ferdinando Casini, a former speaker of the lower house of parliament.

The election, often compared to a papal conclave because it is just as unpredictable and rife with intrigue, is in the hands of just over 1,000 national and regional parliamentarians, who vote daily via secret ballots.

On Wednesday, there were 412 blank ballots out of 978 votes cast, as well as 125 votes for outgoing President Sergio Mattarella, 114 for Guido Crosetto, a former rightist lawmaker, 62 for Paolo Maddalena, a retired constitutional court judge, and 52 for Casini.

Blank ballots dominated by an even larger extent in the first two rounds of voting on Monday and Tuesday. The dynamic of the election is expected to change from Thursday’s fourth round, when the winning majority will drop from two-thirds to just over 50%.

“I think Draghi’s candidacy for the presidency of the republic is still there if there is a grand political agreement,” former Prime Minister Matteo Renzi said, adding that Draghi would otherwise carry on leading the government.

According to Giancarlo Giorgetti, economic development minister from the far-right League, “the word is that nobody wants to vote for him (Draghi), so if nobody votes for him, it is difficult for him to become president.”

Democratic Party leader Enrico Letta insisted that parties needed to work on a consensual candidate, rather than push for a partisan solution like Senate speaker Maria Elisabetta Alberti Casellati, a right-winger.

Her election “would be the fastest way to blow everything up,” Letta tweeted.

Draghi leads a national unity government. Promoting him president would require cross-party agreement on his successor, which is proving elusive and is raising fears that the move could bring about a much weaker administration or snap elections.

A good number of lawmakers do not want to take the risk, especially those with scant re-election prospects, who would lose on a pension if parliament is dissolved before September.

Casini, a veteran Christian Democrat first elected to parliament in 1983, would be a popular fallback option for them. Alternatively, parties could ask Mattarella to serve a second term, even though the 80-year-old has said he wants to stand down.

Silvio Berlusconi, the former premier, was also eyeing the presidency, despite his scandal-hit career, failing health and ongoing trials for corruption. He dropped his bid, which had little chances of success, on Saturday.