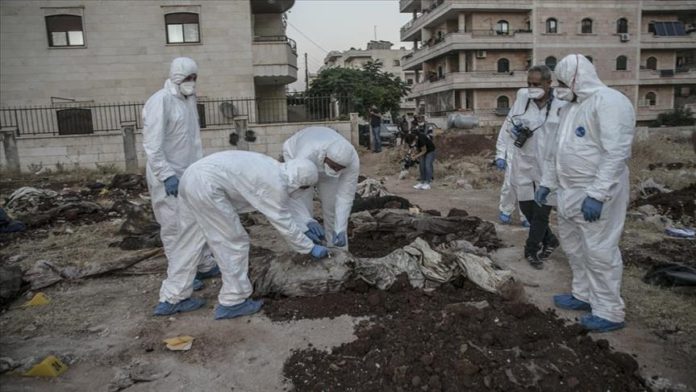 Turkey’s National Defense Ministry said on Wednesday that 35 bodies were found in the northern Afrin district of Syria and the number of deaths might increase.

“Another war crime of the terrorist organization PKK/YPG came to the light,” the ministry said on Twitter.

According to the statement, on receiving information that YPG/PKK terrorists buried mass bodies at an empty land in the neighborhood of Afrin in January 2018, the said area was excavated.

“35 bodies were found in sacks following the excavation conducted under the supervision of the prosecutor,” the statement said, adding that a rise in the number of bodies is feared as the excavation continues in the region.

Since 2016, Turkey has launched a trio of successful anti-terror operations — Euphrates Shield (2016), Olive Branch (2018), and Peace Spring (2019 — across its border in northern Syria to prevent the formation of a terror corridor and enable the peaceful settlement of residents.

In its more than 35-year terror campaign against Turkey, the PKK — listed as a terror organization by Turkey, the US, and EU — has been responsible for the deaths of nearly 40,000 people, including women, children, and infants.

In the past decade, around half a million people have been killed and more than 12 million had to flee their homes.

1 dead in protests against state of siege in Democratic Republic...