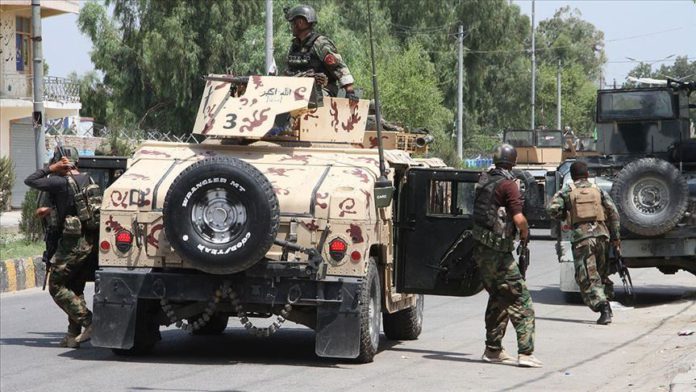 Faiz Mohammad, deputy governor of the northwestern Badghes province, told Anadolu Agency a coordinated overnight raid by the Taliban on a number of checkpoints was repulsed by security forces. He said more than 30 Taliban insurgents were killed and five security forces injured in air and ground offenses that continued till 5:00 a.m. on Sunday (0030GMT).

The Afghan National Army’s (ANA) Special Operations Corps said in a statement that four more insurgents were killed when similar insurgent assaults were repulsed in the central Ghazni province. Two security forces were confirmed killed by the provincial administration here in a different insurgent attack.

There has been no immediate claim of responsibility for these attacks from the Taliban.

However, Afghan President Mohammad Ashraf Ghani said last week that over the past five months the Taliban have killed or wounded 12,279 Afghan security forces and civilians in various attacks, a charge the Taliban denied.

US calls for accelerating peace process

The top US peace broker, Zalmay Khalilzad, urged all sides all sides to accelerate the peace process and start intra-Afghan negotiations as soon as possible.

He said this following an attempt on the life of a female member of the Afghan government’s negotiating team, Fawzia Koofi, which he called “a cowardly and criminal act” by those who seek to delay and disrupt the peace process.

“Fawzia is an important voice, a member of the inclusive Islamic Republic (Afghan government) negotiating team and has been a strong advocate of women’s rights. We are relieved she escaped without serious injury,” he tweeted.

Separately, France became the second country after Australia to express opposition to the release of Taliban prisoners as part of the prisoner exchange process ahead of the proposed peace talks.

“France is particularly concerned by the presence, among the individuals liable to be released, of several terrorists convicted of killing French citizens in Afghanistan,” the Foreign Ministry said in a statement.

The release of 5,000 Taliban prisoners in return of 1,000 captive security forces was agreed on this February in a landmark deal between Washington and the Taliban as a condition for intra-Afghan talks to begin.