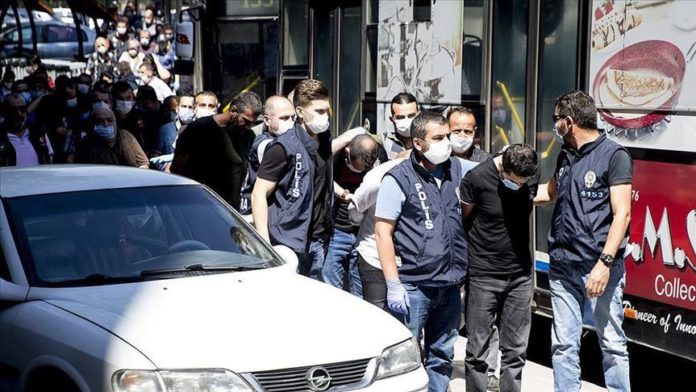 Turkey remanded into custody 34 of 67 suspects early Sunday from a crime group in the largest anti-narcotics operation in Turkish history.

The remaining 33 suspects were released under judicial control.

The suspects were arrested and millions of dollars seized in an anti-narcotics operation last month, according to the Interior Ministry.

The “Swamp” operation was conducted in collaboration with nine countries and led to the arrests of 74 suspects and seizure of 70 million Turkish liras ($10 million), while 281 properties were confiscated.

Interior Minister Suleyman Soylu told reporters in Ankara the crime group has two kingpins, with one wanted on an Interpol red notice.

Anti-narcotics teams targeted individuals involved in drug trafficking and other illegal activities in Turkey, the Netherlands, Belgium, Italy, England, Spain, Brazil, Ecuador, Peru, and other countries since the 1990s, according to a security source who requested anonymity due to restrictions on speaking to the media.

Officials also seized a number of properties, seven safe deposit boxes, assets and bank accounts of the group’s members and executives, as well as accounts of 16 companies owned by the individuals.

April 13, 2020
We use cookies to ensure that we give you the best experience on our website. If you continue to use this site we will assume that you are happy with it.Ok