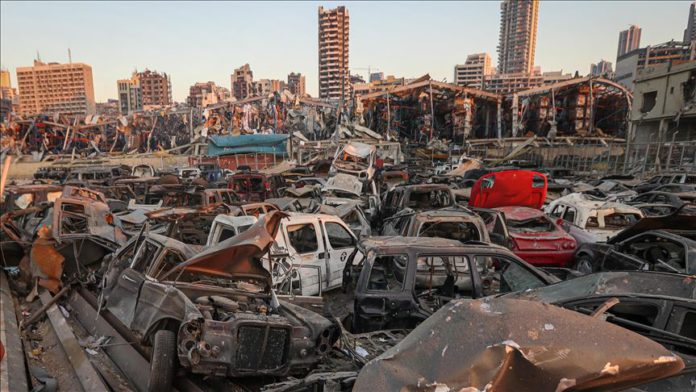 The Lebanese capital is still in mourning Friday after a massive blast hit the Port of Beirut earlier this week and left damages estimated between $10 to 15 billion.

The blast caused the deaths of 154 people and 6,000 injuries, in addition to dozens of people missing.

Diabetic and hypertension sufferer Fadia Naser told Anadolu Agency that at the moment of the blast she hugged her son and closed their eyes.

“We thought it was fire shooting at the beginning, I went to check what’s happening when I felt something like an earthquake.” she said.
“When we opened our eyes we didn’t see each other because of the dust. In a moment everything was damaged.”
Karmen Alam said “she heard planes’ sounds that was followed by an explosion. Within less than a second, we were injured but survived.”

“We don’t know what will happen more than what happened. May Allah bestow His mercy on the martyrs,” she said.
Another citizen who spoke anonymously said “at the time of the blast, I was outside my area, I tried to reach my family but all telecommunications were cut.”
“I couldn’t reach my neighborhood because of the rubble in my car, I saw the amount of destruction and I saw the dead and injuries. I pulled out my family from the rubble and took them to hospital,” he said.
His “parents are in critical condition” but “we will pitch a tent and stay in the roads near our homes.”
There are an estimated 300,000 residents who have been displaced in Beirut as a result of the massive blast, according to a statement by Governor Marwan Abboud, but most refused to leave their homes that have no walls and windows.
Mayor Jamal Itani confirmed “most of the people don’t want to leave their homes … that’s why we only provided accommodation to 10 families outside the capital.”
He said the municipality sent teams with aid to families and to help remove rubble from homes and help in sealing broken windows.
“What was provided is insufficient and we seek with donor countries to find solutions,” he said.
Lebanese charities and volunteer teams rushed from across the country to extend support to those affected.
“We came here holding a humanitarian message, and to say that Beirut doesn’t die … we seek cooperation to return Beirut back and we will fulfill the martyrs message.” said Rania Kanan from a civil society group called Green Orient.
The government announced the formation of an investigation committee to probe the deadly blast within a period of five days, while others demanded it conduct an international investigation.
The blast rocked Lebanon while the country is experiencing its worst economic crisis, including a dramatic drop in the value of the pound against the dollar.

Pakistan sees 30% surge in mental illnesses due to COVID-19