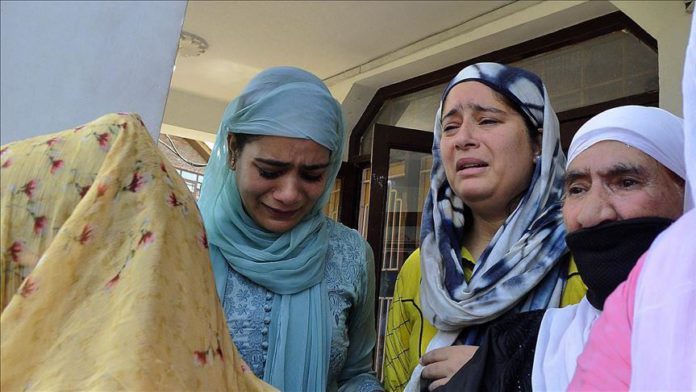 Omar Abdullah, former chief minister of the region, said that everything becomes a “propaganda tool” in the bloody violence in Kashmir.

“A three year old toddler has to have his misery broadcast to the whole world to drive home the “we good they bad” message. We would have got the point without his misery being filmed & shared so please don’t,” Abdullah wrote on Twitter.

Amnesty International India has also said that by disclosing the identity of a minor witness of a crime, Kashmir zone police stands in violation of Article 74 of the Juvenile Justice (Care and protection of Children) Act, 2015 which strictly prohibits identification of any minor through name, residence, photos or by any other means.

Critics say that dignity of the dead and vulnerability of the survivors are all being treated as a joke on social media without taking into consideration that how it is going to affect the victim family particularly when a child is among the victim.

“Stop sharing graphic photos and videos of the kid mindlessly for some retweets. Journalists should be especially careful. It is unethical and insensitive. Not many can handle the trauma such images can trigger,” Majid Maqbool, a senior journalist, wrote on Twitter.

After the heart-wrenching images went viral on social media, Sambit Patra, Indian ruling party’s chief spokesperson, mocked it on Twitter by captioning the image “PULITZER LOVERS??,” a swipe at three Kashmiri photojournalists who won the Pulitzer Prize for their searing images earlier this year.

Many Indians denounced the tweet and called on him to show some empathy.

“Do you have an iota of empathy left in you?” Dia Mirza, an Indian actress, wrote in a Twitter post while mentioning the tweet of the BJP spokesman.

Sagarika Ghose, a journalist, while requesting the spokesman to delete the tweet, said: “It is heartless and hateful tweet. Intense suffering and a grieving child, not the moment for nasty politics. Kindly delete.”

Chaudhry Fawad Hussain, a Pakistani federal minister, wrote on Twitter: “I am in a state of a shock, how one can be so heartless? #ModiEndia is a shame for humanity, cursed group of people….. #Shame #Shame #Shame‪”

As the social media erupted with the war of words on the incident, political parties in Indian-administered Kashmir are seeking an inquiry into the killing of the man.

The Jammu and Kashmir’s Apni Party demanded an impartial probe into the matter after the family claimed the deceased man was killed by government forces.

In a statement, the Apni Party spokesman said that the family version of the deceased and the circumstantial evidence, prima facie suggest that the man was killed in cold blood.

“The government should order an impartial investigation into the circumstances that led to the killing of the deceased man.”

Police in the region have rejected the claim, and blamed militants for the killing of the 65-year-old civilian.

April 29, 2020
We use cookies to ensure that we give you the best experience on our website. If you continue to use this site we will assume that you are happy with it.Ok