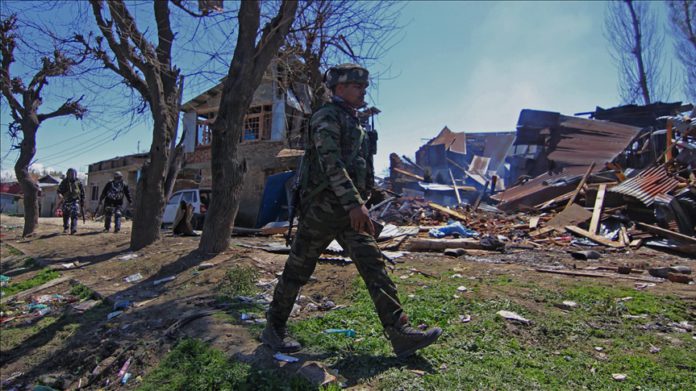 Three suspected militants were killed during an operation in Indian-administered Kashmir on Friday, police said,

Two civilians, protesting against the killings, also suffered bullet and pellet injuries during a clash with police.

The police claimed killing the three militants in Kakapora area of Pulwama district, one of the southern Kashmir districts where a resurgent militancy has shown no signs of ebbing for the past seven years.

Inspector General of Police Vijay Kumar said in a statement that the deceased militants were responsible for the killing of a policeman guarding the house of a local leader of the Bharatiya Janata Party on the outskirts of the capital Srinagar on Thursday.

He also claimed that the forces recovered a rifle and a pistol, which the militants had taken away from the dead policeman yesterday, from the site of the operation.

A large number of villagers took to streets in protest against the killings, a photographer who witnessed the protest, told Anadolu Agency on condition of anonymity. They were shouting pro-freedom and anti-India slogans.

The protest soon turned violent with the protesters hurling stones at the police who responded firing teargas canisters and shotgun metal pellets into the crowd.

Health officials told Anadolu Agency on condition of anonymity that a woman, Ishrat Jan, who had suffered a bullet injury, and a man, Ghulam Nabi Dar, who had multiple shotgun metal pellet injuries, were referred to a tertiary care hospital in Srinagar, about 36 kilometers (22 miles) away from the clash site.

Militants enjoy widespread support in Kashmir and their funerals used to attract large crowds, prompting the authorities to deny the militants’ bodies to their kin and bury them in faraway hamlets instead since March 2019.

Barbados to remove Queen Elizabeth as head of state