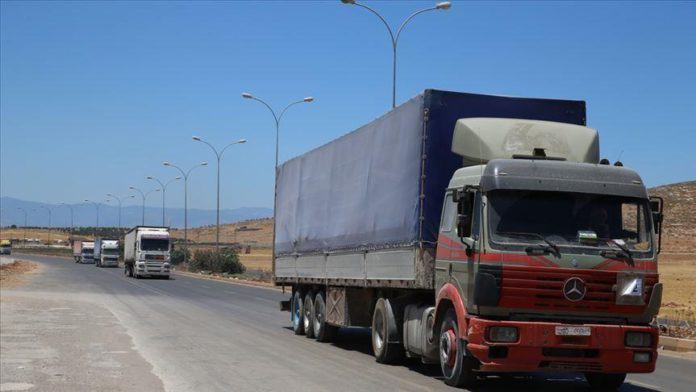 The UN on Friday sent 29 truckloads of humanitarian aid from Turkey into Syria’s northwestern Idlib province on what might be the last full day of a vital lifeline for millions in the area.

The trucks crossed into Idlib through the Cilvegozu (Bab al-Hawa) border gate in Turkey’s southern Hatay province, according to UN officials.

Depending on the outcome of a vote in the UN Security Council on Saturday, the border gate might be shuttered, cutting off critical supplies to millions of displaced people in Idlib.

Russia has said it intends to veto the gate’s continued authorization, possibly along with China, despite an outcry by aid groups and the international community.

Idlib falls within a de-escalation zone forged under an agreement between Turkey and Russia. The area has been the subject of multiple cease-fire understandings, which have frequently been violated by the regime and its allies.

In an open letter to media outlets on Thursday, Kerem Kinik, head of the Turkish Red Crescent, said: “It is the strong hope of all humanitarians that UN Security Council Members will put humanity first and respect for human life and dignity will prevail.”

“The last humanitarian aid crossing into Syria must stay open at all costs to protect more than 4 million people in dire need,” he stressed in the letter.

Trucks carrying relief goods from Turkey to the Syrian opposition-controlled territory go through the crossing every day. But, if the UN Security Council fails to agree on an extension of the border opening, the life-saving shipments could end this Saturday.

From Moscow’s point of view, UN cross-border aid undermines the sovereignty of the Bashar al-Assad regime, which Russia supports.

Russia has used its veto power in the Security Council to prevent extensions of three other such aid crossings.

An estimated 3.5 to 4 million civilians currently live in northwestern Syria.

ANALYSIS: Tajikistan: Transition in the cards despite Rahmon winning another term