Nearly 2,500 languages worldwide are at risk of extinction, a Turkish official with the United Nations Educational, Scientific and Cultural Organization (UNESCO) said Sunday.

In an exclusive interview with Anadolu Agency, Ocal Oguz, chairman of the Turkish National Commission for UNESCO, said nearly 7,000 languages are spoken worldwide.

“Among these, nearly 2,500 languages face extinction because the number of their speakers is very low. Unfortunately, according to statistics and compiled data, one of these languages disappears every 15 days,” Oguz said.

Oguz said “language endangerment and disappearance have increased in recent decades due to social, political and economic changes in the world.”

Noting that languages spoken by less than 10,000 people make up the bulk of those in danger of disappearing, he said the fact that the languages of many communities belonging to the Turkish language family are among those that will disappear requires special attention.

Stating that it is difficult to reach the speakers of around 200 languages, Oguz said more than 250 languages have disappeared since 1950.

He added that according to UNESCO, a language should be spoken by a minimum of 10,000 people to ensure intergenerational transmission. 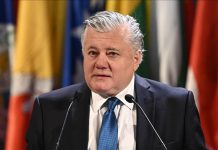