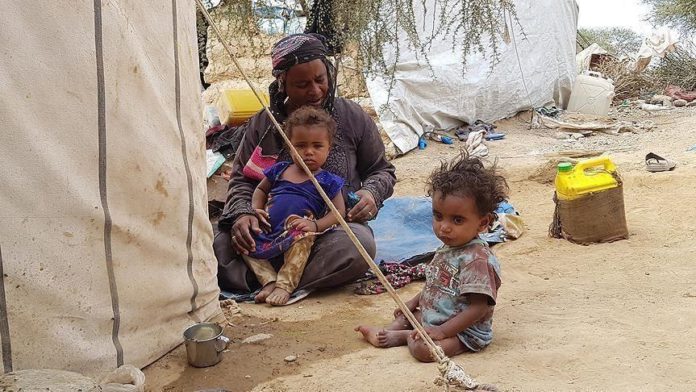 More than 22,000 Yemenis have been displaced by the violence taking place in the central Marib province, according to the UN.

“The Office for the Coordination of Humanitarian Affairs (OCHA) tells us that conflict is continuing unabated, including in Marib, where violence has displaced over 22,000 people since early February,” Stephane Dujarric, spokesperson for UN Secretary-General Antonio Guterres, told a press conference at UN headquarters in New York.

Dujarric said Yemen’s economy has been “in free fall,” sending the currency to record lows, “meaning that more people can afford less food and basic goods.”

“This is alarming since more than half of the country’s population is facing food insecurity and 5 million people are one step away from famine,” Dujarric warned.

While praising the increase of humanitarian funding in the past few months, he said more funding that is “flexible and predictable” is required to sustain the efforts.

“A surge in donor support over the past few months has had a significant impact. Yemen’s Humanitarian Response Plan is now 44% funded, up from 15% just in February, so we thank those who have given and encourage others to do the same. But, as you see, much of the funding will run out in the coming months,” Dujarric said.

In recent months, Iranian-aligned Houthi rebels have stepped up attacks to take control of the oil-rich Marib province, one of the most important strongholds of the legitimate government and home to the headquarters of Yemen’s Defense Ministry.

On Feb.13, the Yemeni army launched a large-scale operation against the Houthi rebels on various fronts in Marib to protect the province.

A Saudi-led coalition aimed at reinstating the Yemeni government has worsened the situation, causing one of the world’s worst man-made humanitarian crises with 233,000 people killed, nearly 80% or about 30 million needing humanitarian assistance and protection, and more than 13 million in danger of starvation, according to UN estimates.