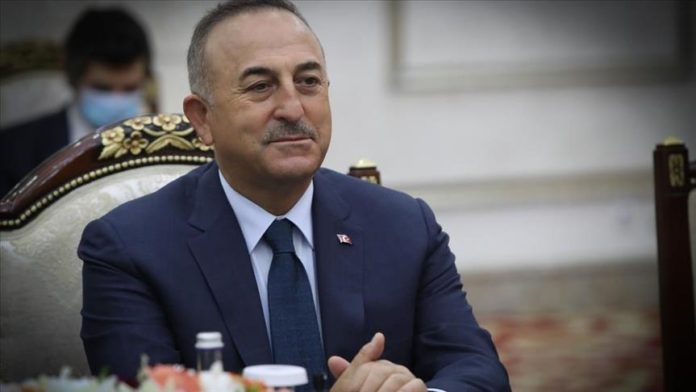 “There is a reality that everyone now sees, the Asian Reality. The 21st century will be Asia’s century. We, as a historical part of Asia, launched the Asia Anew Initiative to take our place in this rise,” Cavusoglu said, referring to the initiative to enhance Turkey’s relations in the new era with Asian countries while continuing its trade with Europe.

“Our initiative aims to more strongly reconnect with Asia and turn our position between the Euro-Atlantic and Europe, the world’s first and second economic areas, into an advantage,” he said.

He highlighted that Asia’s contribution to world economic growth has reached 50%.

Cavusoglu emphasized that there is a goal of strengthening transport and communication links between Turkey and Central Asia in the coming period.

“Let’s take advantage of opportunities that come our way by combining our strength with the Central Asian countries,” Cavusoglu said.

“We need to further strengthen our brotherhood with concrete projects,” he added.

“A country’s foreign policy is a mirror of that nation’s values, Cavusoglu said.

He stressed that Turkey is working to solve crises that threaten the region, including in the Caucasus, Syria, Libya, and the Eastern Mediterranean.

Cavusoglu added that wherever in the world people face persecution or any kind of disaster, Turkey rushes to help regardless of the language, religion, or race of those people.

The Turkic world “has been divided by artificial walls” for years, and with the “collapse of the wall” Turkey and the Turkic world embraced each other, noted Cavusoglu.

He said it was a great pleasure that the cooperation established around the Turkic language, “a language of civilization,” has turned into the vision of the Turkic Council nowadays.

“The Turkic Council, the foundations of which we laid in 2009 with four countries, including brotherly Kyrgyzstan, has reached a point of pride today.”

He also emphasized how important Azerbaijan’s victory was in the recent Karabakh war for the Turkic world.

“We, as Turkey, Azerbaijan, and Georgia, aim to have other Central Asian countries involved in the projects we have implemented,” he said, adding that these were the “main issues” discussed during the visits to Uzbekistan, Turkmenistan, and Kyrgyzstan.

“Embrace the traditions but be open to the future,” Cavusoglu said, addressing the youth at the university.

He recalled that the Kyrgyz-Turkish Manas University, founded in 1995, has so far had more than 9,000 graduates working in 43 countries across five continents.

“Aim for being above the level of contemporary civilization. For this, have your free opinion. Be alert to harmful movements like FETO [Fetullah Terrorist Organization]. Do not surrender your will to anyone,” he said.